"Sin City! Deal out some damage in this fast action shoot'em up. Ideal for Kill Confirmed matches."
— Description

Octane is a multiplayer map in Call of Duty: Ghosts. It takes place in a sand-ravaged intersection in Las Vegas.

This is one of the most heavily trafficked parts of the map.

Two ladders within buildings lead to the rooftop that offers a sniping position that overlooks the majority of the map. A small bridge connects the two structures and enemies will surely be guarding the ladders, so be careful when attempting to access the roof.

There is a long pathway that could be dangerous due to the long distance it's built. Long-range weapons such as sniper or marksman rifles are perfect to use here. There are two ways to enter the second floor of the building: outside, via ladder or a staircase inside the building.

Not a lot of activity usually occurs in this area. It can be used as an alternative route and safe way to call in Care Packages or Killstreaks.

This section connects the left and right section of the map. A lot of vehicles that can be utilize to get through windows and onto the roofs of buildings.

The strip club can be entered by either going inside the doorways or climbing up a truck jumping to the available hole in the wall.

The back of the motel is the Ghosts initial spawn point. There are two staircases leading at both sides of the corridors; underneath is a tunnel that serves as a pathway to the middle section; however, it may be guarded by another player. Inside, holes in the walls provide fast movement when navigating through rooms. The windows on the second floor of the motel are popular camping and sniping positions. 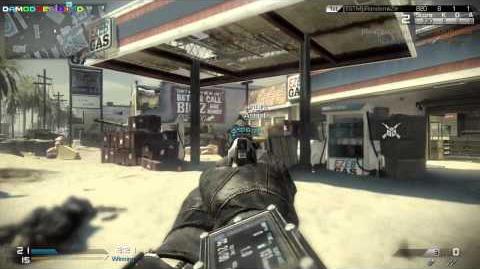