"Menendez, successfully captured during the Yemen assault, is brought on board the USS Barack Obama for immediate interrogation."
— Mission description

"Odysseus" is the ninth mission in Call of Duty: Black Ops II that takes place on the U.S.S. Barack Obama. After capturing Raul Menendez, the ship comes under attack.

The level is preceded by a short cutscene on the deck of the Obama between Admiral Briggs and David Petraeus. The direction of this cutscene depends on the player's actions in the Strike Force missions. If they were all successfully completed (with the exception of Second Chance), the two will converse fondly about the recently developed alliance between China and the U.S. If the Strike Force missions were not all completed, then the conversation will be more sour and the Secretary of Defence will order DEFCON 3 due to China now being armed against the U.S. Regardless, the cutscene will end with the arrival of Mason and the captured Menendez.

Odyessus opens with Menendez being interrogated by Salazar, before requesting to speak only with Mason, who then enters the interrogation room. The two converse briefly but Briggs interrupts Mason with news that the Obama is under attack by enemy drones. This leads to Menendez holding Salazar hostage and knocking Mason unconscious.

Mason is awoken by Salazar, who informs him that Menendez has escaped. Mason then fights his way throughout the contested Obama, fighting against invading mercenaries and the ship's own automated defense system, whilst communicating with Briggs, who suggests rebooting the ship's system. Salazar moves to Briggs' location, while Mason finds out that rebooting will allow Menendez access to the server room, but is unable to inform Briggs before the Admiral allows the operation to happen. If Harper's alive, he'll inform Section of the Jet Wings assault on the Obama and clear some PMCs using Jet Wings to board the Obama. He'll also take control of auto turrets to assist Section while proceeding to the bridge.

At this point, several potential outcomes can happen as a result of the player's action in the previous missions Karma, Achilles' Veil and potentially Second Chance.

The player shifts control from Mason to Menendez, standing outside the server room with DeFalco, if he survived the events of Karma, or a random mercenary if he did not. Menendez enters the server room and takes Briggs hostage. Salazar, who is revealed to have been working with Menendez then opens fire on the sailors and potentially others depending the player's actions:

If Chloe was rescued in Karma (and DeFalco killed) and Farid survived the events of Achilles' Veil, Salazar will attempt to shoot Chloe, resulting in Farid jumping in front of her, taking the bullet and dying, whilst Chloe is then knocked unconscious by Salazar after trying to tackle him.

If Chloe was rescued in Second Chance and Farid survived Achilles' Veil, DeFalco will knock her unconscious before he is shot by Farid, who is then shot by Salazar.

If Chloe was rescued in Second Chance, but Farid did not survive Achilles' Veil, she will be killed by DeFalco, who slices her throat.

If Chloe was rescued in Karma, but Farid did not survive Achilles' Veil, she will surrender to Salazar, who will then shoot and kill her.

If Chloe was captured in Karma and was not rescued through Second Chance, but Farid survived Achilles' Veil, he will then shoot DeFalco, but is shot in return, resulting in the pair of them dying. This also results in the player unlocking the Showdown achievement.

If neither Chloe nor Farid are present, then Salazar will simply shoot the sailors and move on.

Menendez will then be given the chance to either kill Briggs by shooting him in the head, or sparing him at Salazar's urging by shooting him in the leg. If the player simply waits and doesn't shoot at all, Salazar will knock him unconcious, essentially leaving Briggs unharmed. He then proceeds to upload a virus into the U.S. satellite network that controls the entire U.S. military drone fleet, before the player shifts control back to Mason.

Mason then enters the server room and ascertains Menendez's goals. If Chloe survived the confrontation, she will awaken and suggest and start working on a method to try and stop Menendez. Briggs, if he survived too, will give Mason some advice before falling back unconscious. It is at this point that Harper can turn up, provided he survived the events of the previous mission.

Mason then chases after Menendez, who has escaped the Obama, encountering Salazar, who has surrendered. If Harper is present, he will execute Salazar for his betrayal. If not, then Mason will simply order him off. Mason then makes his way to the deck of the ship, and boards a VTOL. A Merc manages to wound pilot Crosby, but Section (or Harper if he survived Achilles' Veil) will proceed to shoot the Merc and kick him off the VTOL as it is rising and thus concluding the mission. 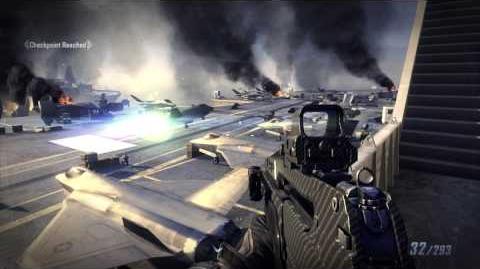 Five-Seven
Add a photo to this gallery

Executioner
Add a photo to this gallery

M1216 with MMS
Add a photo to this gallery

RPG (not obtainable)
Add a photo to this gallery

Fighting through a hallway.

Controlling one of the rogue turrets.

Trying to override the system.

Regaining control of a turret.

Menendez outside of the control room with a Mercs soldier (if DeFalco was previously killed in Karma).

Section seeing the extent of the virus' damage.

Escaping the USS Obama.
Add a photo to this gallery

Retrieved from "https://callofduty.fandom.com/wiki/Odysseus?oldid=2501045"
Community content is available under CC-BY-SA unless otherwise noted.