Call of Duty Wiki
Register
Don't have an account?
Sign In
Advertisement
in: Call of Duty: Advanced Warfare Heavy Weapons

The Ohm is a directed-energy Heavy Weapon featured in Call of Duty: Advanced Warfare, released with the Ascendance DLC. It was made available to Season Pass holders on Xbox consoles on March 3rd, 2015 and April 2nd, 2015 for the other consoles.

The Ohm can switch between two distinct modes, LMG and shotgun mode. When the player spawns, the LMG mode is activated, which is a three shot kill at almost any range and fires at 666 RPM. It is near impossible to require a four shot kill against a non Exo Stim user, as the enemy has to be more than 203 meters away in order to not fall under the three hit kill range; a said sightline of that range is unlikely to exist under normal circumstances.

The Shotgun mode is almost statistically the same as the S-12. It is a large-spread, fully automatic shotgun that fires at 500 RPM. The buckshot is very weak and the spread is very large, but due to the fully automatic fire, the player can be sure to kill in a few shots. The hip-fire cone does not increase in size while shooting, which most of the other weapons do. When in shotgun mode, the usual switch button will instead convert the Ohm into its LMG mode and not switch to the secondary weapon. This makes switching to a secondary weapon with the Ohm in shotgun mode dangerous, as it will take about two seconds to convert the Ohm into LMG mode and then switch to the second weapon. The animation for converting the Ohm into LMG mode cannot be bypassed with exo boosts to the side, unlike when converting the Ohm into shotgun mode.

Despite being a Directed Energy Weapon, the Ohm is fully capable of wall penetration (including the Shotgun mode, in which the penetration is still High).

The accuracy is pretty good. The recoil pattern is a bit bizarre but should be fairly easy to control, and the iron sights are very clear.

The Ohm uses a 40 round belt magazine. This isn't a lot of ammunition compared to other light machine guns, but the Ohm reloads significantly faster than them.

The handling traits of the Ohm are bizarre. The aim down sight speed is slow, at 450 milliseconds. The movement speed is also sluggish, causing the player to move at 84% of regular speed. The hip-fire spread is extremely large, and makes using the shotgun mode problematic and quite unreliable. However, the Ohm has a decent reload speed, which is an oddity for a Heavy Weapon, and helps out considering the player only has a 40 round belt. The Ohm also features higher visual sway when aiming down the sight than other weapons.

The Ohm has a bizarre set of attachments, as the Foregrip is absent from being used. The optical attachments are best left ignored, as the Ohm's iron sights are very precise. The Quickdraw Grip and Stock can be very useful to improve overall handling of the weapon. The Laser Sight can be extremely useful due to how large the hip-fire spread is. Extended Mags is a useful attachment, making the magazine size 60 rounds. This makes reloads quite tolerable due to its infrequency and speed. The Tracker can be useful when using the shotgun, as it can be common to not kill the enemy during troubled gunfights. Rapid Fire can be very useful on the Ohm, as the Light Machine Gun mode increases to a decent 833 RPM, and the Shotgun mode becomes a swift 625 RPM, contending with the S-12. Advanced Rifling isn't very useful on the Light Machine Gun mode, but the Shotgun mode gets a great benefit from using the attachment, and can be very useful if the user will rely on the shotgun more.

In conclusion, the Ohm is a very useful weapon to use. The combination of a Light Machine Gun and a Shotgun give the user a lot of flexibility, and adds a lot of versatility onto a player's class setup. However, the sluggish handling traits and slow rates of fire can be troublesome, and that the player's magazines can be depleted easily in some cases. With the right control and knowing when to switch weapons, the Ohm can be a very deadly weapon in the right hands.

The Lunacy is one of the strongest variants of the Ohm. It increases the fire rate (LMG mode only) to 750 RPM, making the weapon more lethal in terms of damage per second. However, it raises the ADS Time to 495 milliseconds. This is a quite minor drawback and is easily countered by equipping the Quickdraw Grip.

The Lycanthrope is another very powerful variant. It increases the long range damage from 33 to 35, effectively eliminating damage fall-off as the Ohm will now deal the same amount of damage at all ranges, making it always a three-shot-kill. The downside is that the Lycanthrope's LMG mode rate of fire is reduced to 600 RPM. This is not a big difference from the default but it is noticeable.

The Unending is a questionable variant to use. Even though its magazine size is increased to 60 rounds (which becomes a hefty 90 rounds with Extended Mags), making reloads significantly less frequent, allowing for sustained use, it comes with a 10% bigger viewkick in addition to adding penalties to both rate of fire and range. The significantly increased magazine size can often come in handy in prolonged gunfights but given that both range and fire rate are penalized and the viewkick increased, the Unending is a very questionable variant to use and may be highly situational at best.

The Ohm was subject to a glitch upon release. If the user was using the Shotgun mode, and was aiming down the sights while using the low zoom option of the Hybrid Sight, all of the pellets would hit in the exact same location. Should the shot have hit, it would have always caused a kill. This has since been patched.

The Ohm appears in Exo Zombies mode. It is introduced on the map Carrier along with the M1 Irons and returns in Descent. Its magazine capacity is increased to 80 rounds, and it holds 300 rounds in reserve. The shotgun mode returns, albeit with a much lower fire rate.

Due to its high damage per shot and integrated shotgun, it is a worthwhile weapon to use. Like the Pytaek and the Ameli, using the Ohm impacts the movement speed; therefore, a lighter secondary weapon is a good choice in case the player needs to run faster. Due to the quite long reload time, Exo Reload is a helpful exo upgrade to use with the Ohm.

The shotgun mode has its damage increased in exchange of lower rate of fire. Something to note is that the maximum ammunition for the shotgun changes from 300 to 75 when switching. While one could think that both modes don't share ammunition, actually a shotgun shot consumes four Ohm shots, therefore explaining why the reserve ammo is reduced. This means that using both modes is quite unpractical as the shotgun is likely to burn all the reserve ammunition quickly. In addition, the shotgun is not as powerful as the CEL-3 Cauterizer, the Tac-19 and even the S-12. Therefore, it is best not to use the shotgun mode unless the player prefers to use a weapon other than a shotgun as a secondary weapon. Exo Stockpile is also a helpful upgrade as it slightly increases reserve ammunition.

It gains a Target Enhancer sight at Mk 4, a Stock at Mk 7 and a Quickdraw Grip at Mk 10.

Note: Across all variants, the statistics on the Ohm's shotgun mode bar magazine capacity and effects from integrated attachments remain unchanged.

Render of the Ohm

The Ohm in third person

Promo for the Ohm.

Promo for the Werewolf variant of the Ohm. 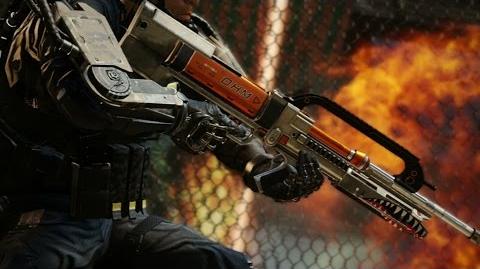