Mujahideen (after their betrayal)

"Mason re-enlists with the CIA and joins Woods in Afghanistan, supplying weapons to the Muhjahideen in exchange for vital intel on Menendez' whereabouts."
— Mission description

"Old Wounds" is the third campaign mission in Call of Duty: Black Ops II, and the second 1980's mission. The player takes control of Alex Mason, who helps fend off a Soviet attack on a Mujahideen compound in Afghanistan.

After hearing of Raul Menendez's involvement in selling firearms in Afghanistan, Mason and his team are sent there to rendezvous with a contact from China, Tian Zhao, to go to the Mujahideen base and get wind of Menendez's involvement through their contact in the Mujahideen, Rahmaan, who in an quid pro quo exchange demands weapons in exchange for his knowledge on Menendez.

However, as the Mujahideen have little experience in using the American weapons, Woods suggests they join them in the front lines. Rahmaan seems reluctant to comply with Woods's request, however, before he has time to reply, he is interrupted by an Soviet attack on the compound. Mason, Zhao, Woods, and their fellow soldier go out to repel Soviet attacks in various locations around the mission locale.

After they successfully hold off an attack at a weapons cache, Mason, Woods, and Zhao are called back to the Mujahideen compound, and witness a massive, final Russian attack on the way, which is spearheaded by a colossal tank viewed through binoculars. The three, along with other soldiers, charge in head-on to meet the Russians in battle. After his horse is killed, Mason avoids being ran over by the Russian tank. After Woods assists him in getting on the tank, Kravchenko is shown to have survived, and it re-triggers the numbers, and Mason begins to hear Viktor Reznov's voice in his head once again as Woods examines the unconscious Kravchenko. Mason or Woods can kill Kravchenko during interrogation.

Rahmaan then betrays Woods, Mason, Hudson, and Zhao either way, claiming them to be the true enemy, and leaves them in the desert to die. After some time has elapsed an aged Reznov will appear to rescue the team. Woods was highly certain it was just Mason's imagination playing tricks on him again. 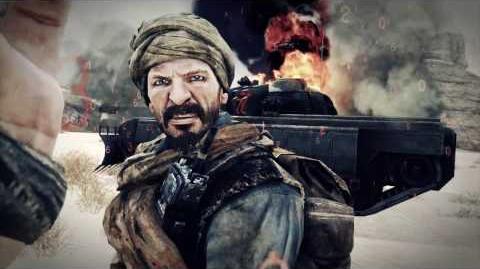 Mason attempting to resist the numbers.