The Olympia can be found frequently throughout the level "Payback," in which it is considerably effective, but still suffers the same problems as it does in multiplayer; specifically, the lack of range and constant need to reload, meaning that on higher difficulties, this weapon will be largely ignored and longer range weapons will be used.

The Olympia is a part of the default CQB class, and is always unlocked for the player's use.

The Olympia is semi-automatic, firing at a rate of 212 RPM. This fire rate is easily the slowest of all semi-automatic shotguns, but considering the Olympia deals a high damage per pellet up close and has a longer maximum damage range, 212 RPM is good. There is a 283 millisecond delay between shots.

The Olympia's accuracy is subpar for the shotgun class. The Olympia has the default shotgun hip-fire spread, which is moderately large, and the Olympia doesn't gain tighter spread when aiming down the sight, but rather a slightly wider spread. For this reason, users should avoid aiming down the sight with the Olympia at all times, for it confers no accuracy advantage and slows the user down to a palty 40% strafe speed while aiming. The only way to tighten the spread of the Olympia is to crouch, go prone, and/or use Steady Aim.

The Olympia's handling characteristics are hit or miss. The Olympia moves at 100% of the base movement speed, has the fastest drop times in tier at 0.55 seconds or 0.15 seconds with a quick drop secondary, has an average 0.75 second raise time and a below average 0.55 second raise time with a quick drop secondary, and the Olympia reloads very slowly, taking 3.3 seconds to reload one shell or 3.9 seconds to reload two shells. The Olympia's reload cancel time depends on if the user is performing a partial or empty reload. A partial reload can be reload cancelled in 2.15 seconds, and an empty reload can be reload cancelled in 2.65 seconds. These reload speeds are some of the slowest in class per pellet. All other shotguns reload one or two pellets much quicker than the Olympia can.

The Olympia has the worst capacity in class, holding just two rounds maximum. Despite the small capacity, the Olympia has a decent starting ammo loadout, as users will spawn in with twenty rounds total, eighteen in reserve.

The Olympia provides no attachments. As such, Warlord is a terrible perk choice, as the Pro version is the only aspect of Warlord that'll provide a tangible benefit.

The Olympia is available in Zombies as an easily available weapon, spawning alongside the M14 near or relatively near the player spawn on all maps except  Dead Ops Arcade and the Call of Duty: World at War classic maps. It costs only 500 points, the amount players spawn in with. It functions much like the Double-Barreled Shotgun in the Call of Duty: World at War maps, though it is cheaper and available right away at the cost of being weaker and having less ammo. If aimed well, one shot of the gun will kill Hellhounds in the later rounds. Although it is very effective, after round 6, it loses its one-shot-kill capability. It can be a very useful gun with Juggernog and Speed Cola. Double Tap Root Beer seems to have little effect because of its low magazine capacity. It is not recommended to keep the Olympia after round 7, unless it is Pack-a-Punched.

When upgraded via the Pack-a-Punch Machine, the Olympia becomes the Hades, with an increase in power, range, as well as switching to incendiary rounds with 60 extra rounds. Plus, its reload speed seems to increase (not as much as Speed Cola would). The Hades kills zombies effectively until around rounds 19 to 20 and is a good window-watcher weapon. It always kills Hellhounds in one shot to the head regardless of how late it is in the rounds.

Bringing out the Olympia 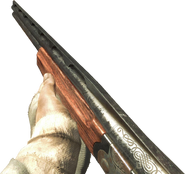 Diving with the Olympia

Render of the Olympia

The Olympia in Call of Duty: Black Ops Zombies

The Olympia returns in the campaign and Zombies in Call of Duty: Black Ops II.

The Olympia is available at the start of the campaign, only in the customizable loadout, and now it accepts attachments.

"You are a sight for sore eyes, handsome."
— Misty

The Olympia returns in Call of Duty: Black Ops II Zombies, much the same as it was in the previous installment. It is available for 500 points off the wall near the start on each map except Origins, where it is replaced by the Ballista with the Iron Sight attachment. It performs similarly, if not identically to its Call of Duty: Black Ops counterpart, remaining a one-shot-kill until about round 6, unless Double Tap Root Beer is purchased, in which case it retains its one-hit-kill ability until round 11. When Pack-a-Punched, it becomes the Hades, and cannot be Pack-a-Punched more than once. If Double Tap Root Beer is used on Hades, it will still kill within one shot until round 28. With only two shells in the magazine, it quickly becomes ineffective afterwards, even though it is a two shot kill until round 30.

Olympia with long barrel. This model is used for the standard Olympia in Zombies mode.

Render of the long barrel model of the Olympia

The Hades in first person

The Olympia is available for use in Multiplayer via Supply Drops as of the August 15, 2017 update. It is similar to the Black Ops iteration, except that it has a new reloading animation.

The Olympia in first person

Aiming down the Olympia's iron sights

Picking the Olympia up 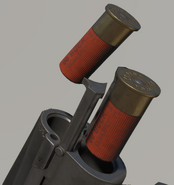