Call of Duty Wiki
Register
Don't have an account?
Sign In
Advertisement
in: Call of Duty 4: Modern Warfare Factions

"Watch your fire up here, we're looking for a civilian"
— Romeo One-One

One-One Team is the Task Force 141 team seen during the epilogue mission in Call of Duty 4: Modern Warfare, "Mile High Club". They are tasked with securing a VIP aboard a hijacked civilian aircraft.

If the player turns on the subtitles, the team uses codenames instead of their actual names. The leader seemed to be Romeo One-One, the player can only hear Echo One-One if he doesn't free fall off the plane, he tells him to hurry up. Charlie One-One says, "Shit, someone's armed the bomb!" It is confirmed that Soap is one of the team members, as he makes plans and strategies for the operation in his journal.

All members of the team use an MP5SD and a silenced USP .45 to take down the hijackers, except for Romeo One-One, who used a silenced M4A1 with a red dot sight and grip, as well as a W1200 on his back. However as usual, the player can also pick up enemy weaponry. The weapons also allude back to the "Crew Expendable" mission, and the only weapons that can be picked up are the P90, Skorpion, Mini-Uzi, M1014, and the M9. Romeo One-One uses an M4A1 Suppressed, which is identical to the one Cpt. Price and Gaz use in Crew Expendable. 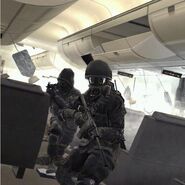