The One Inch Punch is a melee upgrade that replaces the player's standard knife in the Zombies map Origins. It allows the player to punch zombies from a distance with a powerful force, causing zombies to fly away. It can kill a zombie with a single melee attack until round 19. The One Inch Punch is required for the map's easter egg Little Lost Girl, which upgrades it.

Obtaining the One Inch Punch

In order to obtain it, the player must charge up four soul chests that are located throughout the map (listed below) by killing 30 zombies near them. If a Giant Robot steps on a chest while it's not yet full, the soul chest gets closed and the counter towards completing the chest will be reset. Note that zombies spawned by a dig spot will not count towards filling the soul chest.

Once a soul chest gets full, it will disappear. Once all the four soul chests are completed, players can go to a Rituals of the Ancients station and they will be rewarded with the One Inch Punch, in the form of a glowing energy ball. To get the One Inch Punch the player must highlight their crosshair over the bottom-most medal, and press the action button.

Should a player bleed out and lose their One Inch Punch, or otherwise not be present in-game when the chests are completed, the player simply has to go to a Ritual of the Ancients station and take the One Inch Punch.

Three of the four footprints containing the chests are located along Odin's patrol route down the center of the map, and the fourth one is found in Freya's path down the western side of the map. The locations from north to south (the direction of all the robots' patrols) are as follows:

The One Inch Punch can be upgraded during the Little Lost Girl easter egg. The player has to get to the main tomb and hit roughly 20 Crusader Zombies marked by white smoke with the One Inch Punch. The players are only required to remove the smoke and not necessarily kill the zombies. After reaching the required amount, a power-up appearing as the stone for the G-Strike Beacon will be dropped, and picking it will upgrade the One Inch Punch. The upgraded version gains a one-hit-kill attack until round 36 and has an extra elemental attack depending on which staff the player was holding at the time of the picking the stone; for example, players with the Fire Staff will set zombies on fire with their punches.

The One Inch Punch in the Ritual of the Ancients box. 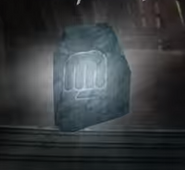 The Upgraded One Inch Punch Power Up. 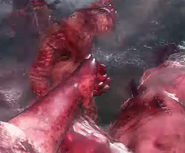