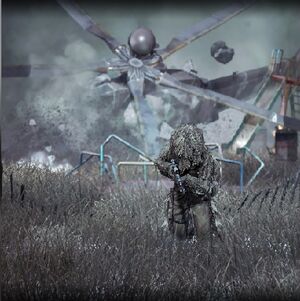 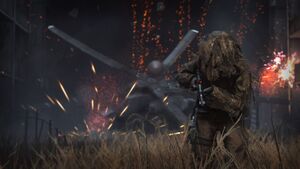 (Bold objectives are optional and exclusive to the "Remastered" edition.)

"A shot at that distance is tough in the best conditions. That day we had wind gusts and prowling helicopters. And even if we made the shot, we still had to get to the extraction point alive. If it was going to be easy, they wouldn't have called us."
— Call of Duty: Modern Warfare Remastered level description

"Target down. I think you blew off his arm. Shock and blood loss will take care of the rest."
— Captain MacMillan after the player snipes Imran Zakhaev.

One Shot, One Kill is the fourteenth (chronologically, the second) mission of Call of Duty 4: Modern Warfare and Call of Duty: Modern Warfare Remastered, and is part two of Captain Price's flashback to Pripyat. It takes place 3 days after the events of "All Ghillied Up". It sees Lieutenant Price and Captain MacMillan snipe Imran Zakhaev and then escape from Pripyat. It also appears in a flashback during Call of Duty: Modern Warfare 3, when playable character Yuri witnesses the assassination attempt by Price and MacMillan, and the rescue of Imran Zakhaev by Vladimir Makarov.

Lt. Price and Cpt. MacMillan patiently wait on the top floor of the hotel with a Barrett .50cal sniper rifle for 3 days. While the assassination target, Imran Zakhaev, is attempting to sell uranium fuel rods to Russian Ultranationalists, Lt. Price takes the shot and dismembers Zakhaev's left arm. Their cover is blown when an enemy helicopter returns fire, which Price promptly shoots down by sniping the pilot. A second helicopter locates the two and opens fire on the hotel. The two rappel down the side of the hotel as the top floor collapses and continue to escape to the extraction point. It is later revealed that Zakhaev survived this seemingly fatal blow.

They fight through Ultranationalist forces and attempt to lose them through apartment buildings. They are then spotted by another helicopter and they manage to shoot it down, but it crashes toward Price and MacMillan. MacMillan's leg is injured by the helicopter's debris and is unable to walk, so Lt. Price must carry him to the landing zone. When they arrive at the extraction point which is at the ferris wheel in Pripyat Amusement park, and wait for the chopper to arrive, waves of Ultranationalists retaliate.

They hold off until the chopper arrives, and Lt. Price and Captain MacMillan are lifted to safety.

During the flashback to "One Shot, One Kill" in "Blood Brothers", Yuri witnesses the attempted assassination from the back seat of a car driven by Makarov. After getting his arm blown off, Zahkaev makes a break for the car and the trio flees, running over a few of Makarov's men without care as the flashback ends. Interestingly, some of the weapons seen in the mission (Mini-Uzi, W1200, G3) are not seen on the tables present, which are still in view of Yuri. 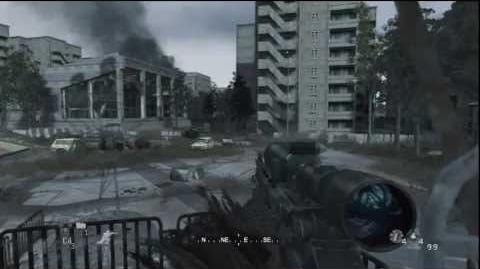 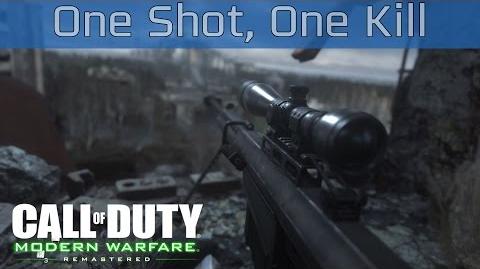 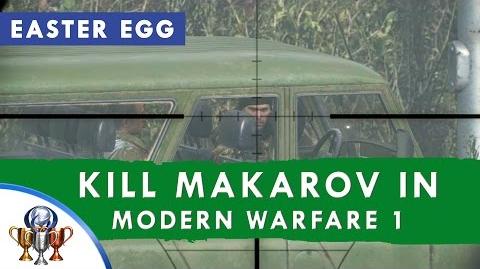 Price about to man the Barrett .50cal (Modern Warfare Remastered)

Aiming at Vladimir Makarov in the car (Modern Warfare Remastered) 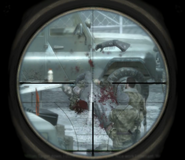 The convoy that waited for Zakhaev's arrival

Zakhaev still having both arms

Makarov speaks to Yuri in a car during the assassination attempt, as seen in the Modern Warfare 3 mission, "Blood Brothers"

MacMillan pinned down by the helicopter in (Modern Warfare Remastered)

Main article: One Shot, One Kill/Transcript