The Oni is a Mashimo fully-automatic energy handgun featured in Call of Duty: Infinite Warfare.

When all side missions are completed, the Oni unlocks the Energy Boost upgrade, which reduces fall-off damage at the cost of a slower fire rate.

The Oni is unlocked at level 14. The Oni has an integrated Harmonic Microcontroller attachment that increases fire rate the longer the trigger is held.

Damage is low, requiring a few shots to kill at most distances. Rate of fire is a tad slow when the trigger is first pressed, but when the trigger is held longer , the rate of fire increases. At close ranges this can help the player make up for any missed shots , but this can dampen its ability to kill enemies at longer ranges without firing in bursts.

The Laser Sight is a good option, as this will improve the Oni's close quarters ability.

Akimbo is a somewhat risky on its own but a viable option when used alongside the Laser Sight.

Ram Servo is not recommended due to the Oni's already low damage , meaning that even though a shot that bounced off a wall may hit an enemy, it is highly likely it will deal a minuscule amount of damage.

Quickdraw is unneeded as pistols have short ADS times.

Fusion Mag may help partially negate ammo issues, however waiting for the magazine to recharge is not a good idea in close quarters. Suppressor can be used in close quarters to retain stealth as well as reduce the Oni's muzzle flash, as the Oni isn't particularly good at long range.

One of the two Epic protoypes, the Kaiken trades the Oni's 20 round magazine and full-auto nature for a Hand-Cannon-esque setup: High damage and a low fire rate. Upon pressing the "fire" button, the Kaiken will charge (approximately 200 milliseconds) and immediately fire.

Damage is high, being a one shot kill to the body in close ranges, or a two shot kill at longer ranges (one shot headshot). If the shot bounces off a surface, it will still deal a good amount of damage, being a two shot kill.

This variant in Multiplayer only has one shot in the magazine. As such, the Dexterity perk is  recommended to anyone intending to use this variant in multiplayer , as its rate of fire is directly tied to its reload. In Zombies, the Kaiken instead has a reduced magazine size of 15 rounds.

In Zombies, the Kaiken does massive damage, being able to kill in 1 shot until the late teen scenes. However it has a very low rate of fire, which emphasizes the need for accuracy when using this variant. Also this is the only variant that fires bullets that bounce off surfaces without the Ram Servo.

Neither the Particle Amp nor the Fusion Mag are compatible with this variant in any mode.

The Oni is available from a wall buy for 750 points on Zombies in Spaceland and The Beast From Beyond, and can be obtained from the Magic Wheel for 950 points on Rave in the Redwoods, Shaolin Shuffle and Attack of the Radioactive Thing. In Zombies in Spaceland, it is located on a bench behind the Pack-a-Punch portal. In The Beast From Beyond , it is in the starting area on some dark crates. It is available for customization at level 25.

The Oni is a low damage weapon , taking multiple shots to kill a zombie even at lower rounds. As such , the Oni is good at earning cash for the player , acting as a cheaper alternative to other weapons such as SMGs. However , the Oni's fire rate increases the longer the trigger is held down , meaning that the Oni gets harder to control when going full auto.

The Oni also has a smaller than average magazine at 20 rounds , meaning the reloads are frequent and may be required after a kill or two. Ammo comes to be a big hinderance in maps where this weapon is not a wall gun , as the accelerated fire rate may lead to ammo issues.

Deadeye Dewdrops is a great perk to be used with the oni , as the large recoil that come with holding the trigger down is negated.

The Oni tends to struggle at the teen scenes by itself , and as such should either be upgraded or switched for another weapon.

In conclusion , the Oni is a great starting weapon , being able to earn a lot of money for the player at the cost of direct damage; however it may struggle in the mid and high scenes.

Oni vs Ogre vs One Eyed Willie 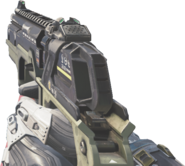 The Oni in first person 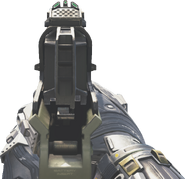 Aiming down the Oni's sights 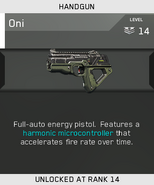 The Oni being unlocked in multiplayer 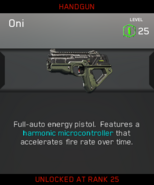 The Oni being unlocked in Zombies