Call of Duty Wiki
Register
Don't have an account?
Sign In
Advertisement
in: Call of Duty: Ghosts DLC

Onslaught is a downloadable pack for Call of Duty: Ghosts. It is the first DLC to come out for Ghosts. It was released on January 28, 2014 and first on Xbox 360 and Xbox One and Febuary 27, 2014 on PlayStation 3, PlayStation 4, and PC. It contains four multiplayer maps (Fog, Ignition, BayView and Containment) and Episode 1 of the Extinction story, Nightfall. It includes two bonus weapons: the Maverick assault rifle and the Maverick-A2 sniper rifle. It has a blue color scheme in the 2nd Season Pass trailer.

The multiplayer maps play a large role in the achievement Egg-stra XP!

For the first time in Call of Duty history, players can find easter eggs on the DLC Multiplayer maps and earn bonus XP for completing the passive "Egg Hunt" operation. Each of Onslaught's four DLC maps has one "Extinction Egg" hidden somewhere in the map, and must be shot once to count towards the task. Once all four are found, players are rewarded a bonus 2000XP. This can only be done once, but it also must be done in a public multiplayer match, not in a private match or Squads.

Additionally, when players destroy the first hive in Nightfall after the Eggs are found, they get an additional 10,000 XP on Extinction. 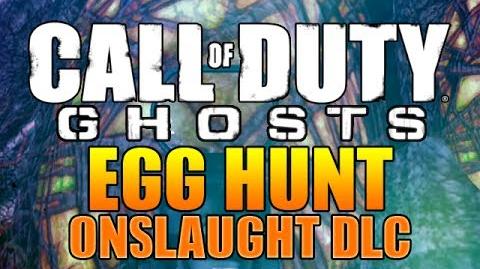