"Operation 40: Undertake a daring assassination attempt during the Bay of Pigs invasion."
— Briefing

Interrogator: "'61. Bay of Pigs. What happened?"
Mason: "*laughs* We all got killed."
— Interrogator and Alex Mason

"Operation 40" is the first campaign mission in Call of Duty: Black Ops. This mission introduces the player to most of the story's main characters. The mission takes place in Santa Maria, Cuba on April 17, 1961, as Mason, Woods, and Bowman attempt to assassinate Cuba's notorious dictator, Fidel Castro as the Bay of Pigs invasion is taking place, under the orders of the United States.

OP 40 team inserted with Bay of Pigs forces in Cuba

A cutscene plays showing an unknown interrogator who is asking Mason numerous questions. Mason is electrically shocked multiple times, failing to give satisfactory answers to the questions. Mason then has a flashback leading to the start of the operation to assassinate Castro. The mission begins in a bar in the city of Santa Maria, with Woods, Mason, and Bowman wearing loose tropical civilian clothing as to not attract attention, meeting with their informant Carlos. He provides the team with intel and a map showing the planned method of attack and an extraction point at a Cuban military airfield. The meeting is interrupted with the sudden arrival of Cuban Army soldiers who enter the bar. Woods tells Bowman and Mason to stay low as the soldiers scare off the civilians from the room. An Officer notices the team and becomes suspicious, then threatens Mason when he does not respond to his questions. Woods quickly grabs the officer and impales his hand to the bar table with a knife, then smashes him in the face with a glass bottle. The team, including Mason, who pulls out an ASP pistol, eliminate the remaining enemy soldiers. Carlos takes out the team's weapons he hid in the counter and tosses Mason an M16 assault rifle, which was equipped with a grenade launcher and an ACOG sight.

The police are notified and quickly arrive on the scene and surround the bar, ordering the team to surrender. Mason and Woods then exit the bar and fend off the police in the streets while Carlos and Bowman give supporting fire. More police cars arrive and the team unites together to fight their way out. They arrive at a plaza where the police have barricaded the road, forcing the team off the street. They find an empty car in an alleyway. Carlos stays behind to get his men ready to assist the team after they find Castro, while the team uses the car to escape Santa Maria, with Mason at the wheel. After driving down the city streets and through police barricades, he whites out and a cutscene plays to the interrogation room where Mason, fading out of consciousness in his seat, is given an electric shock and he fades away once again into his flashback.

The mission resumes with the team overlooking Castro's building from the other side of a large ravine. They wait for the airborne forces from the US to commence the Bay of Pigs invasion. A rebel fires a signal flare and the sky comes alive with American and Cuban military aircraft along with anti-aircraft fire and air raid alarms. The team, now aware that the invasion has begun, quickly zipline across the ravine into the building, where Woods and Bowman each kill a Cuban soldier as soon as they land. On entering the building, Woods tasks Mason to take out a soldier who is radioing for reinforcements against the air raid. Mason chokes him to death, using garrote wire.The team moves onto the building and a large close-quarters firefight ensues with the Cuban Army inside.

After clearing out a number of rooms, the squad comes before the door leading to the room where Fidel Castro is supposedly hiding in. The team stacks up and Mason pulls out his ASP. They break open the door and Castro immediately draws a pistol, using his mistress as a human shield. Mason shoots Castro, and after a short cinematic of the bullet being followed in its flight in slow motion (only occurs with a headshot), Castro's mistress quickly picks up a gun and she is gunned down as well, much to Woods' disgust.

The team then fights its way out of the building, through a courtyard, where they get pinned down by the sudden arrival of a Cuban military BTR-60 along with more enemy troops. All of a sudden, Carlos and his men arrive and destroy the BTR and drive off the enemy, much to the relief of the team. Carlos urges them to continue to the Cuban military airfield, where the rebels have secured a plane for the team's getaway, and bids farewell. The squad arrives at a cliff edge overlooking the airfield. As the Cuban military is still busy dealing with the rebels, the team runs down the cliff while secured with ropes and make a break across the airfield for the hangar where the plane and the Cuban exile forces are waiting and ready to go. The team arrives at the plane and signal the pilots to go. Mason leans out the back door as he uses an M60 machine gun with explosive rounds to fend off the enemy forces as the plane is taxiing to the runway. Then, Woods and the pilots notice a large column of vehicles set up by the Cuban Army at the very end of the runway, preventing the plane from taking off, Mason quickly jumps off the plane as it begins to speed up, and mans a nearby anti-aircraft gun. Mason fires the gun at the barricade, destroying the blockade and allowing the plane to take off and escape. Mason is left behind, much to Woods' dismay, even though Mason still assures them to go on without him.

Suddenly, Mason is then pulled off of the anti-aircraft gun by the Russian Colonel Lev Kravchenko and is thrown onto the ground and knocked unconscious when a Cuban soldier hits him in the face with a rifle. Mason awakens on the floor at a seaport with a large ship in the background. He sees Fidel Castro and the Russian antagonist Nikita Dragovich discussing what to do with him. Castro explains that Mason and the team merely killed a double, leaving the real Fidel Castro still alive. Castro, wanting revenge on Mason, tells Dragovich to "Make sure he suffers". The mission ends with Mason in the interrogation chair exclaiming that Dragovich really did make sure he suffered. 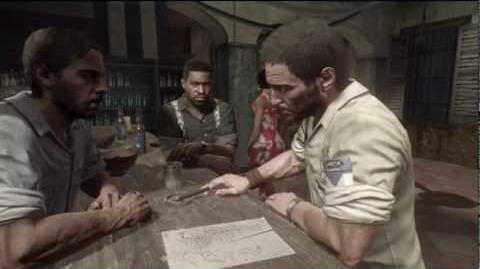 Carlos, Bowman, Woods and Mason planning the attack at the bar.

Woods leaving one last parting shot to the dead soldier.

Carlos throwing an M16 to Mason in "Operation 40".

Mason getting ready to drive.

Mason, Woods, and Bowman in the car getting ready to escape.

Mason driving through a police roadblock.

Woods and Mason dodging bullets in the car.

The Zipline Launcher used by Woods.

Using the Zipline to raid Fidel Castro's base.

Taking out a Garrote Wire on the guard.

Choking the guard with the Garrote Wire.

Running down the mountain and to the airfield.

One of Carlos' Men holding a Skorpion in "Operation 40".

A North Vietnamese MiG in the Cuban airfield.

A soldier and Kravchenko attack Mason from behind.

Dragovich at the end of the level.

Mason and the rest of the team. When seen via "noclip", Mason's headless model is not sitting on the chair but his feet is planted into the ground instead.

Concept Art of the bar

Concept Art of the mansion

"Plantation"
Add a photo to this gallery

Retrieved from "https://callofduty.fandom.com/wiki/Operation_40?oldid=2494865"
Community content is available under CC-BY-SA unless otherwise noted.