The Tortured Path and Bodega Cervantes

"Our mission is to destroy a battery of AA guns that's shooting down our bombers but we have to push through enemy territory and take out those guns before kraut reinforcements arrive."
— Allies

"Our mission is to delay the enemy until reinforcements arrive and protect our flak guns. That battery will keep enemy bombers out of the skies."
— Axis

Operation Breakout is a multiplayer map in Call of Duty: WWII that is exclusive to the War Mode setting a battle between the 9th Infantry Division, "Old Reliables" and 352nd Infantry Division, Wehrmatcht over the destruction or protection of flak cannons in Normandy, France.

On July 25th, 1944, six miles west of Saint-Lô, the 352nd Infantry Division of the Wehrmacht are shooting down Allied bombers with the use of several FlaK 88s situated around the town. The 9th Infantry Division, better known as the "Old Reliables", of the Allied Powers attempt to push into the town in order to neutralize the FlaK 88s for their bombers to continue on their various missions.

Throughout the map the player has the ability to construct various objects, such as a MG42 machine gun nests, that can then be used against enemies to defend (and in one case, attack).

"Capture the command post to get intel on kraut defenses."
— Allies

"Defend the command post and the classified intel it holds."
— Axis

Allies must push through and secure the Axis FOB to gain intel, whilst the Axis have to defend it. Allies are deployed on Manor Approach composing of different building structures (a garage) and vehicles. The Allies can use a frontal approach through the courtyard, which has somewhat poor cover but many routes, or push through the left side which is a underground entrance to a wine cellar, an easily watched bottleneck.

Axis are deployed in the forest behind the command post. They can build two wooden walls and a mounted MG42 on a window. One of the walls covers an entrance from the front, while one entrance covers a flank route by the back of the post. The latter is not advised to be built; although it covers the flank, usually a player will be defending said flank, and if the wall is up, the Axis only have 2 ways into the manor from the rear entrance, which are big bottlenecks.

The courtyard features some medium range lines of sight while the manor itself is close quarters. Shotguns and SMGs are prevalent along with some assault rifles and LMGs , with the Cavalry Division and its shield can be used by the either side to provide mobile cover.

Condition for Overtime: An Allied soldier is capturing or contesting the command post.

"We've capture the command post. Kraut intel's gonna help win the war. Build a bridge to replace the one the krauts destroyed. Then we can advance."
— Allies

"The enemy captured our command post but the battle isn't over yet. Stop the enemy from rebuilding the bridge we destroyed. If they succeed, their tank will advance."
— Axis

This is the smallest section with long range engagements. MG42 turrets, Sniper Rifles and LMGs can be put to good use. A Care Package with a Flamethrower will be dropped for the Axis to use.

After the Allies manage to capture the command post, they must repair a kraut destroyed bridge to push through the town, while Axis must stall the construction of the bridge long enough for German reinforcements to arrive. This is the most difficult objective for uncoordinated Allies due to Axis sniper fire from ground or above leveled building. However, the Allies have a barn situated on their side to cover their teammates. As the Allies, building the bridge comprises of two sections; one for 0% - 50% and from 50% - 100%. The first section is easier as the Allies have a wider area to build from. The second section is near-impossible without Smoke Grenades as the only way to build the bridge is to be exposed from at least two positions. The Axis cannot interact with the bridge to halt construction; the only way to do so is to kill the Allies that are building. The more Allies that are building, the faster the bridge will be built. Allies gain 50 points for every second they build and 250 for finishing a section.

The Axis have multiple sniper positions and 2 MG42 turrets to delay the allies. The most Axis common sniper positions include the two buildings, the destroyed truck, the far left side (while facing the Axis team) and a brick wall at the back of their deployment.

Condition for Overtime: An Allied soldier is building the bridge.

"We built the bridge. Move up! Destroy that German ammo supplies so they won't have ammunition for their AA guns."
— Allies

"The enemy built their bridge but keep fighting. Reinforcements are on their way. Defend the ammunition supply. If it's destroyed, we lose the ammo for our flak guns."
— Axis

After the bridge is built, the Allies must destroy an ammo dump through planting bombs similar to those in Search and Destroy. Each bomb takes 5 seconds to plant or defuse, with a 45 second fuse. Should the bomb be detonated, all walls will be destroyed and any Axis soldiers in the dump will be blown up. Again, a Flamethrower is dropped for the Axis to collect.

The tank is available to be used here; it is armed with a Browning M1919. Be wary though, Axis can flank through the warehouse near the tank to kill the operator of the turret.

"We did it! The Kraut's ammo supply is destroyed. Protect our tank so we can get within range of the main battery then we can destroy the kraut 88's."
— Allies

After the destruction of the German ammo supply, the Allies must now escort their tank to the church to destroy the Axis flak guns behind it. The Axis are airdropped a Flamethrower to assist them.

Stage 1 takes place in the area around objective 3, in the destroyed ammo dump which has significantly reduced cover. Axis have 3 possible routes to take to the tank, while Allies have to escort it. To allow the tank to advance the Allies have to spread out and kill Axis soldiers in the area to prevent them from contesting the tank or flanking Allied teammates. Axis have to focus on enemies near the tank, but also have to cut off Allies advancing towards it.

Stage 2 sees the Axis being respawned very far back at the church to set up defenses. The Allies now have to escort the tank towards the church approach. In this stage, Axis can bring gunfights into close and point-blank ranges, As well as lobbing grenades at the tank. Allies should favor close range weapons, or make sure they can escort the tank to stage 3 as soon as possible so that the Axis do not have a chance to stop the tank at any point during stage 2.

Stage 3 is the hardest part for both sides; should the Allies push the tank to the church, the Allies win, but should the Axis put up a good defense covering all angles, the Axis stand a very good chance to win, depending on how long they stalled the Allies to this point. Sniper rifles can be used here to pick off enemies, but the Axis have a better position to counter snipe as the Allies only have one or two possible locations to snipe from. There are 3 main positions: The church, the trench and the finish line for the tank. The trench provides the best cover along with a MG42 but grenades are effective at flushing out Axis here. The Church entrance is very exposed but can offer surprise attacks on Allies escorting the tank, especially if the Axis saved their Flamethrowers. The tank finish line is well protected, with two MG42 turrets and visual cover (in the form of bushes) for snipers, but exposed to Allied sniper fire.

Allies spawn all the way in the town, by the first checkpoint, and as such, should make their attack attempt count, while Axis are only less than 5 seconds from being able to engage Allies. Condition for Overtime: An Allied soldier is contesting or escorting the tank.

If the Allies are successful in escorting their tank to the church, the Wehrmacht soldiers will flee as the tank destroys the FlaK 88 battery, allowing Allied planes to continue with their missions as three of them fly over the destroyed AA guns.

If the Wehrmacht are successful at any point in stopping the Allied advance, the German FlaK 88s will continue destroying Allied bombers as a battalion of German reinforcements arrive. 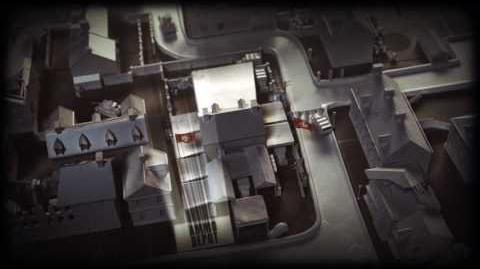 Retrieved from "https://callofduty.fandom.com/wiki/Operation_Breakout?oldid=2461594"
Community content is available under CC-BY-SA unless otherwise noted.