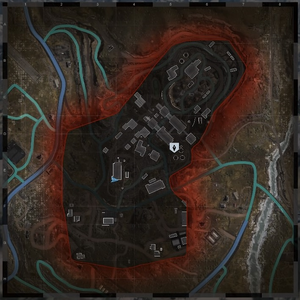 "El Traficante's train has left the quarry carrying explosives. Fight your way through the railyard, recall the train, and rig it for detonation."
— Mission briefing.

Operation Brimstone is an Operation featured within the Special Ops mode of Call of Duty: Modern Warfare. It is a follow-up to Operation Harbinger. The operation was released on November 22nd, 2019 on all platforms free to all players.

After retrieving MAGE, the Arm-4 team infiltrated the Quarry next to their safehouse, under mortar fire. Fighting against Al-Qatala, they disrupted several communication arrays to prevent the AQ forces to call for back up. The team then eliminated three high value targets who guarded the terminal keys for the train control room, this allowed the team to call in the train.

Once the train arrived the loading platform, the team opened the doors and rigged the explosives before going to exfil under enemy fire. Once the team was secured, the train exploded.

Operation Brimstone will require players to attack the quarry. They will have to take cover inside building as several mortar teams will fire at them. The players will have to capture three objectives, defended by dozens of foot soldiers and Juggernauts. The more player close to the objective, the quicker the capture will be. The last objective will have a dozen of suicide bombers spawning in.

Inside the zone, an enemy helicopter will spawn as well as a Juggernaut and dozens of enemies. Before the timer is finished, at least once player will have to prepare the Fulton recovery system. If the system isn't ready before the timer is done, the mission will fail. Once the system is ready, the players will need to attach themselves for extraction. At least one player need to be attached for the mission to succeed.

Retrieved from "https://callofduty.fandom.com/wiki/Operation_Brimstone?oldid=2492244"
Community content is available under CC-BY-SA unless otherwise noted.