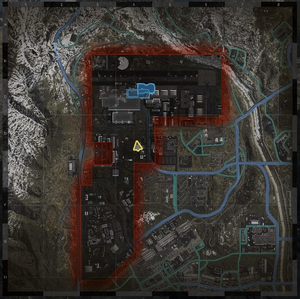 "Infiltrate the AQ-occupied Verdansk Airport, board the hijacked 747, and recover its deadly cargo."
— Mission briefing.

Operation Crosswind is an Operation featured within the Special Ops mode of Call of Duty: Modern Warfare. It is a follow-up to Operation Paladin.

Using Doctor Linda Morales intel, the Arm-4 team infiltrated the Verdansk Airport occupied by Al-Qatala. They desactivated the comms array, preventing the AQ forces in the airport to contact reinforcement. The team then boarded the hijacked plane before it took off and made their way inside it. They recovered the nuclear core before jumping out of the plane. After fighting Al-Qatala in the scrapyard next to the airport, they left the area with the core.

Operation Crosswind will require players to infiltrate an airport. They will have to disable several arrays by capturing them, one outside the aiport and one inside. The more players close to the array, the quicker the capture will be.

The players have two options to disable the arrays, storming the airport or infiltrating it undetected.

If the players choose to storm the airport, dozens of foot soldiers will defend the arrays. Several Juggernauts will spawn for each array. They will be attacked all the way to the plane.

If the players choose to be stealthy, they'll have access to disguises once they disable the arrays. They will have access to a garage beneath the airport and will be able to put AQ garments and use a truck to board the plane and avoid detection.

Inside the plane, players will have less than 3 minutes to retrieve the nuclear core. Dozens of enemies will spawn as well as a Juggernaut. Once the core is retrieved, it will add 20 seconds to the timer. 20 seconds will also added once the door is opened before the players jump out of the plane.

Once on the ground, players will have to fight their way through a scrapyard with dozens of enemies, at least on Juggernaut and an enemy helicopter that needs to be destroyed. Once the helicopter is destroyed, the players can proceed to the helipad for exfil.

Retrieved from "https://callofduty.fandom.com/wiki/Operation_Crosswind?oldid=2492241"
Community content is available under CC-BY-SA unless otherwise noted.