A TUG OF WAR 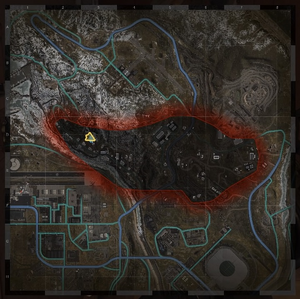 "Gather intel on the whereabouts of local informant MAGE and verify his reports of a "major shipment" leaving Verdansk."
— Mission briefing.

Operation Harbinger is an Operation featured within the Special Ops mode of Call of Duty: Modern Warfare. The operation was released on November 22nd, 2019 on all platforms free to all players.

The Arm-4 team was sent northern Verdansk to find more intel about El Traficante, a smuggler allied with Al-Qatala, after a source inside the terrorist organization, MAGE, reported El Traficante was moving something big across Verdansk. After searching through several safehouses, Arm-4 uncovered a huge amount of money and documents linked to an account tied to El Traficante.

The team proceeded to a hotel where MAGE was held hostage, AQ forces moved him to a convoy but was intercepted by Arm-4 who retrieved MAGE. After fighting enemy forces, the team brought MAGE to the extraction zone where they attached to him a Fulton Device for his exfil. They then regrouped in a nearby safehouse.

Operation Harbinger will require the players to gather intel in several safehouses. After finding a huge amount of money in one of the houses, players will need to find stacks of money or documents in three houses. Dozens of enemies will spawn, as well as two armored vehicles. Each time a player finds a document or a pile of money, it removes 30 seconds to the timer.

Once the timer is finished, players will have to reach a nearby schoolhouse. Several tripwire traps are set in the different rooms and need to be defused or destroyed. Players will need to find stacks of money, each time a stack is found it removes 30 seconds to the timer. They will be attacked by dozens of enemies during that process.

After the analysis is done, the players will need to reach a nearby hotel to save a hostage. Guarded by several enemies and Juggernauts, the hostage will be placed in a convoy that will drive around the map. Players will need to shoot the drivers to stop the convoy and retrieve the hostage who is losing 1% of his health every two or three seconds.

Players will need to pick up the informant and bring him to one of the extraction zones. The exfil spots are either on the roof of a building or on three different spots somewhere near the quarry. If the players choose the roof, they'll find a Sentry Gun as well as several suicide bombers and Juggernauts along the way. If they choose the spot outside the building, an armored vehicle will spawn near it and will have to be destroyed.

The player holding the hostage can't run, crouch, prone, jump or interact with anything (reviving players, entering vehicles or picking up munitions). After the hostage is extracted, the players will then need to regroup in a nearby safehouse. Once a player enters the safehouse, a timer will start. At the end of the timer, the operation is finished. If a player dies during the countdown, the timer resets.

Retrieved from "https://callofduty.fandom.com/wiki/Operation_Harbinger?oldid=2492243"
Community content is available under CC-BY-SA unless otherwise noted.