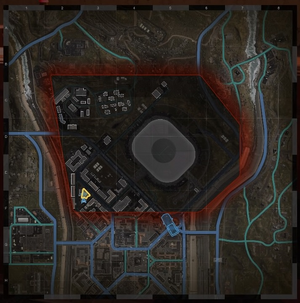 Operation Headhunter is an Operation featured within the Special Ops mode of Call of Duty: Modern Warfare.

The Armistice team "Arm-4" is sent by Case Officer Kate Laswell and Sergeant Kamarov to find intel about Almalik's warehouses in Verdansk. After eliminating several Al-Qatala's lieutenants, the team discovered Almalik used scramblers to protect his communication and hide the warehouses. They found the scramblers around the Verdansk stadium, pulled every data and destroyed them. They fought back armored vehicles sent by Almalik before exfiltration.

Operation Headhunter will require players to eliminate several high value targets, Al-Qatala's lieutenants, one of them being a Juggernaut. They'll have to go to the nearby stadium to capture five scramblers. When capturing a scrambler, players need to stay near it, the more players near the scrambler the quicker it is capture. Once captured, the players will have to destroy it.

The second scrambler will have a Juggernaut protecting it, in addition to dozens of foot soldiers. Players can used the Killstreaks found in boxes around the map to take it down. After the third scrambler is destroyed, six armored vehicles will be deployed. After destroying them, players will need to capture the fourth scrambler with at least one Juggernaut guarding it. When players will capture the fifth scrambler, they will be circled by smoke hiding the deployement of enemies, several Juggernauts will also spawn in. Once the last scrambler is destroyed, players will have to destroy a helicopter and an armored vehicle before running to the exfil.

Retrieved from "https://callofduty.fandom.com/wiki/Operation_Headhunter?oldid=2492237"
Community content is available under CC-BY-SA unless otherwise noted.