Call of Duty Wiki
Register
Don't have an account?
Sign In
Advertisement
in: Call of Duty: Modern Warfare Spec Ops

"Assault Almalik's base of operations and mark his weapons for aistrike, spiking the AQ foothold in Verdansk"
— Mission briefing.

Operation Kuvalda is an Operation featured within the Special Ops mode of Call of Duty: Modern Warfare. It is a follow-up to Operation Headhunter.

Using the data recovered from the scramblers, Armistice located all the warehouses belonging to Almalik in Verdansk. Several Armistices teams were deployed to attack each warehouse simultaneously.

The "Arm-4" team was sent to the Arklov Peak military base, Almalik's base of operations and primary storage facility. The team infiltrated the base and accessed the data server to find and mark weapons stockpiles for missile strikes. During the search, Arm-4 also found ballistic missiles inside the hangar. After the team was exfilled, missile strikes destroyed the weapons stockpiles and killed Almalik in the process.

Operation Kuvalda will require players to infiltrate an Al-Qatala military base, mark crates full of weapons for detonation, and exfil. Players can choose to enter stealthily or to storm the base. They'll need to first capture a server that contains data on the crates' locations by interacting with it and staying close. The more players near the server, the quicker the capture will be. Several Juggernauts will spawn during the capture.

After the server is captured, the players are able to access computers at three different locations. On each computer, the manifest (displayed as /Manifest on the screens) must be scanned to identify the weapons crates. Weapons crates bearing the specified identification serial code must then be marked for destruction. The area near each computer will have three crates that can be marked. Several enemy attack helicopters can spawn during this objective. After all of the crates are marked in the level, a player will need to go to the control tower to open the doors to a hangar. Inside the hangar, ballistic missiles will need to be marked for destruction.

Players can then use one of the two Infantry Assault Vehicles available in the hangar to destroy several armored vehicles on the runway and make their way to the exfil. 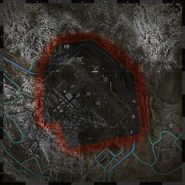 Operation Kuvalda mini-map prior to the 1.13 title update.