Assault the compound with your tanks and destroy enemy planes.

Operation Little Saturn is the seventh level of the Soviet campaign in Call of Duty: Finest Hour.

All it takes is the will of a single man.
Please improve this section by: Plot required without walkthrough.

The level begins with the player's tank and an allied tank group on a small path being attacked by Ju-87 "Stuka" and Junkers Ju 52 dive bombers, and the first task is to shoot down 6 of them. They will be coming from north west, so look out for them in that direction. The tank's coaxial machine gun is best when dealing with them, as it has a fast rate of fire, unlimited ammo and can drop the Stuka in relatively few hits. After shooting down 6 Stukas, the player will need to advance with the allied tanks to the first area of enemy troops that is under fire of the Katyusha truck - mounted rocket launchers, which were seen in the cutscene at the beginning of the level. The first pocket of resistance is easy to defeat - there will be trucks, infantry and tanks over the place in a disorganized way. Then the player will need to advance through the German barracks and warehouses - watch out for Panzerschreks coming out of them. In the open terrain, there will be towers with Panzerschrek troops, Flak canon emplacements and tanks - those should be dealt with at a distance in order not to be destroyed and outnumbered in a head on attack. The yellow star on the player's compass will help the player if confused, or simply follow the friendly tanks.

The player will then reach a large hangar with open doors - drive through them and out through the opened gate on the other side. The next objective is to destroy the three Panzer IV tanks and then reach a similar hangar. Now the resistance will be slightly stronger, with three tanks and Panzerschrek infantry throughout the area. Use the barracks for cover. The small yellow stars on the compass indicate where the enemy tanks are. After destroying the armor units, proceed to the next objective using the yellow star to help find the way. The player will then need to exit the tank and eliminate the troops wielding Panzerschreks that have prepared an ambush inside the hangar. Press the action button when the player sees a green control panel. The player will be armed with a DP-28 and a PPSh-41 and some RGD-33 frag grenades, which will be useful when clearing out the rooms. Press the action button to breach a door when close to it, and when a green door symbol is visible. After clearing the room, breach the door that leads to the stairs. There will be four Panzerschrek troops. A good idea is to run the way through to the stairs, spraying the PPSh at close range, as the Panzerschrek is almost useless against moving targets, especially if there isn't any cover. If the player engages them from the doorway, they risk getting hit with their missiles, or injured by splash damage. Once the Panzerschreks have been eliminated, go down the stairs and wait for the tanks to advance, as the driver stayed in the tank. Press the action button when a green control panel shows up to get in the tank, and the mission will end. 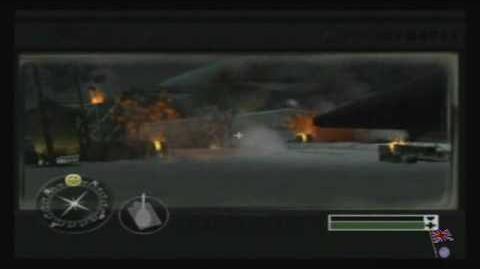