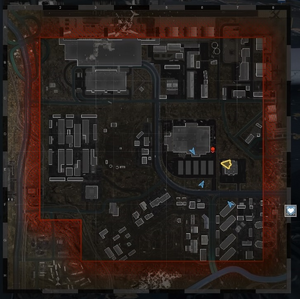 Operation Paladin is an Operation featured within the Special Ops mode of Call of Duty: Modern Warfare. Completing the Operation for the first time rewarded players with the Operator Rodion.

The Arm-4 team is sent to rescue Doctor Linda Morales, a volunteer physician in Verdansk. She was taken hostage by Al-Qatala after she informed Armistice that Mr Z was using medical shipments from the World Humanitarian Project to move hazardous materials into the city.

After the team managed to exfil Morales, she told them that a deal was happening at the airfield. Arm-4 was deployed near by to escort an APC to the airfield. The team encountered several weapon crates containing Chem-Bio weapons derived from Roman Barkov's chlorine gas. Fighting against a large amount of AQ forces, they discovered a nuclear warhead with its core missing before leaving the area.

Operation Paladin will require players to infiltrate a storage facility and capture a jammer to disable it. The more players near the jammer, the quicker the capture will be. The players will then need to rescue the hostage. Players will need to defend their position inside a abandoned swimming pool while waiting for the exfil. Dozens of soldiers and Several suicide bombers will attack the pool.

After the hostage is saved, the players will be deployed near an APC that needs to be escorted to a nearby store. Several mines will need to be destroyed in order to prevent the APC to take damage. Once outside the store, the players will need to mark and defend a crate. If an enemy plants a bomb on the crate, a player will need to defuse it before it explodes. The second crate will be inside the store, several suicide bombers will spawn as well as a Juggernaut. The third crate is outside the store, several Juggernauts will spawn, as well as suicide bombers and foot soldiers. Several armored vehicles will also attack the players. Once the enemies are eliminated and the timer for the crate has stopped, players can proceed to the exfil.

If a crate is destroyed or all the players are downed, players will have the choice to restart the operation, in that case the game starts at the APC section, not from the very beginning.

Retrieved from "https://callofduty.fandom.com/wiki/Operation_Paladin?oldid=2510037"
Community content is available under CC-BY-SA unless otherwise noted.