Operation Shamrock & Awe is a special event that was live in Call of Duty: Modern Warfare Remastered from March 14th, 2017 to April 3rd, 2017[1] and from March 16th, 2018 to March 23rd, 2018. With Operation Shamrock & Awe, several new items were released, including 4 collections worth of items, 6 new challenges, a new gamemode and a second remaster of the map Downpour, as Daybreak.

The Shamrock & Awe event returned in Call of Duty: WWII, from March 13th, 2018 to April 3rd, 2018[2]. This iteration introduced two new ranged weapons, two collections of items, the introduction of weapon charms and reticles, several new gamemodes and a remake of the map Shipment as Shipment 1944.

Daybreak is a revision of the map Downpour, placing Downpour during the daytime and with clear skies. Throughout Daybreak is an Irish theme, featuring map objects such as the Irish flag, shamrocks, leprechauns, castles, pots of gold and a rainbow. The map is available for free to all platforms, and is available for use in private matches.

With the addition of Daybreak came the release of a seasonal gamemode, Daybreak 24/7. All games played with this mode will occur on Daybreak, as either Team Deathmatch, Domination, Kill Confirmed or Hardpoint. Daybreak 24/7 was taken off the playlist on April 3rd, 2017.

Added with Operation Shamrock & Awe came two new camouflages available for the player to unlock via completing certain challenges. Folium Camouflage and Prism Camouflage are able to be unlocked for weapon classes after completing specific challenges on Daybreak, similar to the Ugly Sweater and Gift Wrap camouflages for Winter Crash.

The release of Operation Shamrock & Awe was also accompanied with new supply drop content only available during the active operation. A total of 3 collections were added, with 22 items spanned across the collections. A fourth collection was also added, that is unlocked after completing the other collections, and consists of a single item. The item allows the player to change their character model to Darren "Graves" Cosgrave, the owner of the Depot. An item found in a supply drop that is from the Shamrock & Awe collections are noted with a shamrock on the back of the card.

Shipment 1944 is a remake of the fan-favorite map Shipment from Call of Duty 4: Modern Warfare. Set in Omaha Beach, Normandy, France after the Normandy landings. The map is available for season pass owners on March 13th and all players on March 16th, 2018. Shipment 1944 will stay in the game after the event ends.

The Shipment featured playlist is added to the game, allowing players to play a mosh pit of game modes only on the map Shipment 1944.

The Leprechaun Hunt Moshpit is a mosh pit of game modes including Team Deathmatch, Hardpoint, Kill Confirmed, and Domination with a scurrying leprechaun hiding around the map. Players who manage to eliminate this mischievous little sprite are rewarded with the Scorestreaks they have equipped, providing a quick way to change the game.

Two new ranged weapons are added to the game with the event update, including the M-38 submachine gun and the MG 81 light machine gun. Players are able to earn these weapons via completing Special Orders, opening a variant in a supply drop or completing special collections.

Like all previous events, the Headquarters have been changed to fit the new theme, featuring many St. Patrick's Day themed items, such a clovers, rainbows, a giant mug in the center of the map, and new designs for the targets in the Shooting Range. Captain Butcher returns for the event as well, having a more cheerful attitude than what he had in the previous event.

With this event came several new additions to the Nazi Zombies mode. In the Nazi Zombies lobby, several Irish flags are lined up along the side of the train tracks, as well as clovers and gold coins covering the ground. In each of the three current maps, the player can complete a small clover hunt, which rewards the player one of three special animated camouflages for each map upon completion. The Leprechaun Zombie appears in this as well, rewarding the player who successfully kills it with a melee attack 5,000 Jolts. 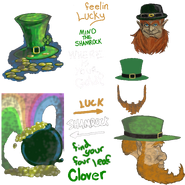 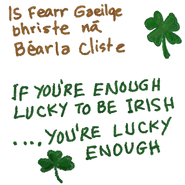 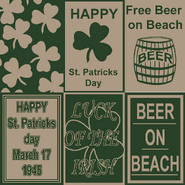 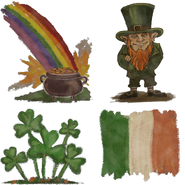 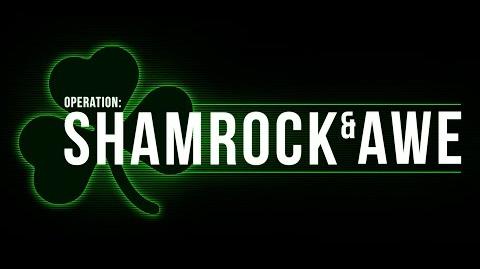 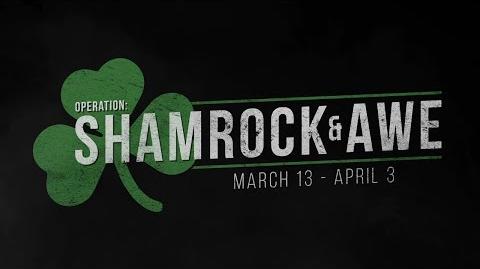 Retrieved from "https://callofduty.fandom.com/wiki/Operation_Shamrock_%26_Awe?oldid=2440757"
Community content is available under CC-BY-SA unless otherwise noted.