Available since its introduction in custom games from March 5th, 2018[2], the Redwood Snow map is available for free on multiplayer to all players on all platforms. The map featured as a remaster of the map Redwood with a distinct snowy texture.

Released on March 6th, 2018, a new sniper rifle was added into Black Ops III, being the XPR-50, returning from Call of Duty: Black Ops II. The XPR-50 was added to the supply drop pool, available to all players to unlock.

Promo image for the XPR-50

Available in supply drops from March 6th, 2018 to March 13th, 2018[1], a new camouflage called Permafrost Camouflage was added into the game, following the trend of timed exclusive camouflages in Black Ops III. March Contraband items were also added into the pool, featuring snowy renditions of Specialist skins. Permafrost Camouflage was only available in rare supply drops for its duration.

Infected also made a return from previous iterations, able to be played for the duration of the event.[2] The gamemode was played on all maps currently in the game, featuring slight changes to previous iterations such as the ability to use custom classes. 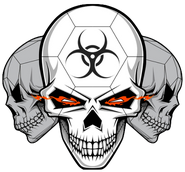 Another promotional image for Operation Snowblind.