0 (Free Starter)
Oracle is a 14-point Support pointstreak introduced in Call of Duty: Ghosts which allows the player to see enemies through walls for a short duration. It pulses every 10 seconds seven times, and teammates can see the enemies for about two seconds. The perk Blind Eye grants immunity against Oracle systems, so players should keep this in mind, as a Blind Eye user could sneak up on someone with an Oracle system up.

Oracle In-game (The enemy's outline can be seen through walls). 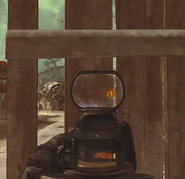 The effects of Oracle.