The Orbital VSAT is a Scorestreak featured in Call of Duty: Black Ops II. It shows both the enemy position and direction on the mini-map by showing the enemy as an arrow-like symbol similar to the SR-71 Blackbird from Call of Duty: Black Ops and Advanced UAV from Call of Duty: Modern Warfare 3. Ghost or any other perk does NOT protect the player from the Orbital VSAT. In addition, it cannot be shot down. It requires a scorestreak of 1200. The Orbital VSAT will last for 45 seconds after it is called in. When it ends, the arrows stop moving and gradually become red dots again.

The Orbital VSAT is a highly useful Scorestreak and can greatly aid the whole team by precisely showing where the enemies are, thus giving the player and their teammates an advantage. It also shows the enemy's Stealth Chopper on the mini-map. The Orbital VSAT is often used in high Scorestreak setups as it greatly helps in surviving and getting more kills towards other Scorestreaks or killstreak medals. The player who called it in also gets 10 points for every kill a teammate gets while it is active; however, if the player dies when the Orbital VSAT is active, assist points will not be given. The only ways to counter an enemy Orbital VSAT are to use the Counter-UAV, EMP Grenade or EMP Systems which disables the enemy radar, all of which can be negated with the Hard Wired perk.

Orbital VSAT Returns in Call of Duty Online mostly unchanged from its counterpart in Call of Duty: Black Ops II, requiring an 8 killstreak (7 with hardline) in game. 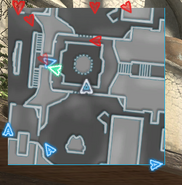 The Satellite killstreak in action
Community content is available under CC-BY-SA unless otherwise noted.
Advertisement