"In a timeline separate from the lives they'd previously known, Dempsey, Nikolai and Takeo were each ordered to intercept the infamous Dr. Edward Richtofen on the battlefields of World War One. Little did they realize, they would soon be forced to fight side-by-side in order to survive the onslaught of the undead horde."
— Map description for Call of Duty: Black Ops III DLC Eclipse promo

Origins, also known as Excavation Site 64 and Dig Site, is a Zombies map included in the Apocalypse downloadable content for Call of Duty: Black Ops II released on August 27, 2013, for the Xbox 360 and on September 26, 2013, for the PlayStation 3 and PC. It is the seventeenth (chronologically the first in the altered timeline) Zombies level.

It is also the sixth (ninth if including survival maps) and final map in Black Ops II.

The "Original characters" (Dempsey, Nikolai, Richtofen, and Takeo) once again appear as the four playable characters, this time as younger, alternate versions of their original selves, having large differences in their personalities. The zombies have yellow-orange and blue blue-violet in this map. The map features new Wonder Weapons called the Elemental Staffs that harness the power of the elements, a new enemy named the Panzer Soldat, the Mark IV Tank, a new utility called the Der Wunderfizz, and new Power-Ups such as the Zombie Blood.

Revealed in the cinematic intro of Origins, Zombies in typical crusader attire appear, but only spawn at underground tombs in the map, as well as within the The Crazy Place, a special area that can be entered by using a Gramophone. Unlike typical zombies, the crusader zombies have blue-violet eyes; the crusader zombies also make different noises than the normal zombies. Crusader zombies spawn alongside other zombies when attempting to activate a 115 Generator, to attack the players.

Six 115 Generators are found across the map, acting as replacements for the classic Power Switch, and only power the area around it. Once all generators have been activated, a reskinned Pack-a-Punch Machine will activate. For the first time, the Mystery Box requires power to be used. The generators also power perk machines, although there are only five conventional perk machines and there are no machines at generators 2 and 6. There are no new perks, but rather a machine called Der Wunderfizz, that gives the player a random perk bottle when activated, much like the Mystery Box.

The three Giant Robots: Freya, Odin, and Thor (from left to right, facing Generator Five from the excavation site) travel across the map in their respective "lanes" and will instantly down players when they step on them unless the player shoots the glowing foot or the player has a golden helmet. A forth robot can be seen behind the "tank station". This is a destroyed robot laying outside the map and is inaccessible.

There are three new power-ups:

Buildables also return, featuring four Elemental Staffs (the Staff of Lightning, the Staff of Fire, the Staff of Ice, and the Staff of Wind), the Zombie Shield with a new dieselpunk aesthetic and the Maxis Drone, which is similar to the MQ-27 Dragonfire, except it also contains Dr. Maxis' brain. The Maxis Drone will follow the player once deployed, shooting at Zombies and reviving downed players, it also must recharge and be picked up again after each use.

Players can also use shovels at certain spots to dig up certain items. These may hold beneficial items, like a weapon, Power-Up, or staff part. They may also spawn something hazardous, like a Zombie or a live grenade.

The story based Easter Egg for Origins is Little Lost Girl, with an ancient threat uncovered by the Imperial German forces in France, three soldiers from the Allied nations with the help of a German Scientist are guided by the voice of a little girl to free her from a place unknown to all.

When zooming in at the burning church with a Sniper Rifle with its standard scope, a picture of a skull suddenly appears on the player's screen accompanied with a high-pitched scream, similarly to the jumpscare in Mob of the Dead. It can be seen here.

Five ciphers can be found in the map as well as one scrap paper. The ciphers give some backstory to the events before Origins while the scrap paper shows a drawing of Primis.

A portion of Origins is remade as part of the final map Revelations. The portion represents the player's path from the spawn room to Generator 3, slightly tweaked with a slope leading to the top of the mount. The pathway to underneath the mount is replaced with a tunnel representing Buried, while the door from Generator 3 to the bunker in the middle now leads into the Mob of the Dead portion of the map.

A remastered version of Origins is available on Call of Duty: Black Ops III if the player has purchased the Zombies Chronicles map pack. The map has been designed to look very high quality while still maintaining the look and feel of the original. Differences include new better Zombies artificial intelligence, and futuristic Black Ops III-era weapons are now available in the Mystery Box and the walls instead of the futuristic-Cold War weapons, although the weapons designed for the map returned, as well as the original wonder weapons. The characters are once again the Primis versions of "Tank" Dempsey, Nikolai Belinski, Takeo Masaki and Edward Richtofen.

The Original crew as they appear in-game.

A Zombie wearing a gas mask.

The group atop the Mark IV Tank.

The Original Characters as they appear in the intro cinematic for Origins.

A Crusader Zombie from the intro. 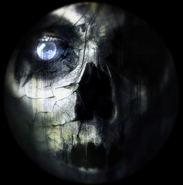 Texture used in the Jump Scare.

Map of the dig site. 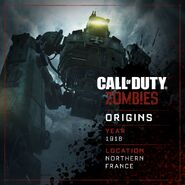 The trenches in Revelations. 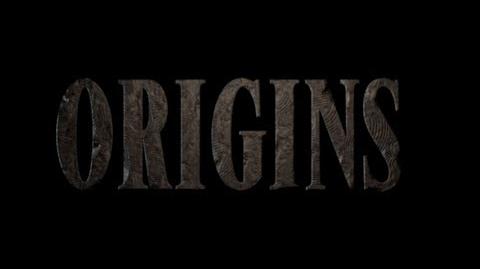 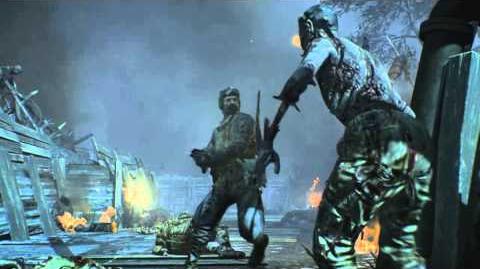 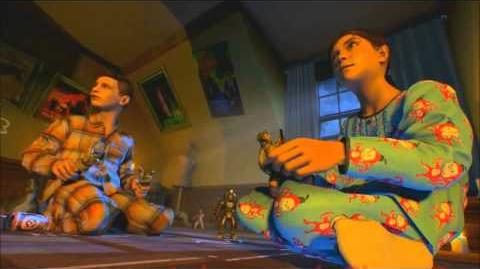 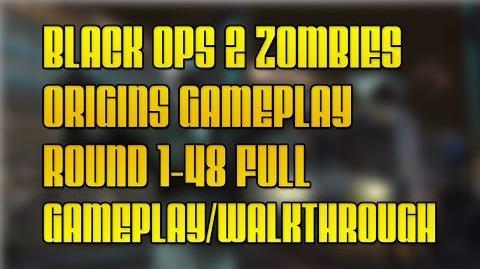