The Osprey Gunner is a 17-point (16 with Hardline) Assault Strike Chain reward that appears in Call of Duty: Modern Warfare 3.

The Osprey Gunner is a hybrid of the Assault and Support Strike Packages, allowing control of the turret and the ability to drop Care Packages into the map.

This strike chain reward calls in a V-22 Osprey. Unlike the Support Strike Package variant, it gives the player control of the gunner position similar to that of the Chopper Gunner from Call of Duty: Modern Warfare 2 and will last for 75 seconds. It also delivers a maximum of three Care Packages that contain strike chain rewards from the Assault Strike Package, similar to the Emergency Airdrop from Call of Duty: Modern Warfare 2.

When an Osprey Gunner is called in it brings up a map and a cursor. This is to mark where the player wants the care packages to be dropped while they protect them with the on-board gun. The Osprey has two sets of flares, therefore requiring at least three lock-on missiles.

Placing the Osprey in the center of the map or an area of the map where most of the fighting occurs is a very effective strategy, because the player will be able to give their team Care Packages, kill huge numbers of the enemy team, and push back their spawns further around the map, potentially spawn trapping them. Although it must be noted that because of the large enemy force, many enemies with launchers such as Javelins, Stingers, SMAWs, and even RPGs will attempt to shoot down the Osprey with relative ease depending on the map and the Osprey's position. Unguided launchers such as the SMAW and RPG can easily take it down due to its low altitude and the fact that unguided launchers do not trigger flares. In addition, if a Stinger or Javelin is fired extremely close to it, the flares will not be able to divert the rocket and the Osprey will still be destroyed.

The Osprey Gunner is absent in the Wii version of the game.

A view of the laptop used to mark the position for the Osprey Gunner.

A third Person view of the Osprey Gunner.

The Osprey Gunner in flight, note that there is no pilot. 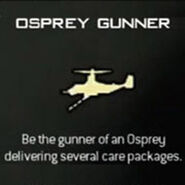 An unused killstreak icon for the Osprey Gunner.