For the map in Call of Duty: Ghosts, see Overlord (map).

Overlord is the code name of an American command base that during combat gives information on the enemy's strength and location, as well as new orders or objectives to the soldiers currently in action.

Overlord was the U.S. Command from Call of Duty 4: Modern Warfare during the U.S. Marine invasion of Saudi Arabia (labeled "Command" in the subtitles, identifying himself as "Overlord" at the beginning of "Shock and Awe"). He was last heard in the mission "No Fighting in the War Room", when all the SAS and USMC teams were ordered to exit the base.

Overlord gives orders to the U.S. Army Rangers, particularly Hunter Two-One, in Call of Duty: Modern Warfare 2. He is heard in "Of Their Own Accord", "Wolverines!" and many other levels, including Spec Ops. He communicates objectives and commands to Sgt. Foley's squad.

Overlord also appears again in Call of Duty: Modern Warfare 3 giving orders to the Delta Force. Those members include Sandman, Truck, Grinch, and Frost. They worked with Task Force 141 temporarily in Down the Rabbit Hole. He is also the Survival Mode announcer and the announcer for Delta Force in multiplayer. During the cutscenes of "Black Tuesday" and "Iron Lady", his information and connecting with the Presidential Aide ranks him as a General Commander. 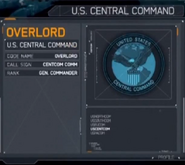 Overlord is heard in the flashback mission Legends Never Die, communicating with and giving orders to Rorke, Merrick, Ajax and Elias as they venture through the flooded city on their quest to eliminate Almagro.