For other uses, see Overwatch.

"Overwatch" is the third campaign level in Call of Duty: Modern Warfare 3: Defiance, it takes place overhead Alaska where a US JSTARS plane guides British S.F.S.G troops into a suspected weapons cache. This mission is very similar to "WMD" from Call of Duty: Black Ops.

This mission alternates between the player controlling Watcher and Wilson. In the opening part, Watcher is responsible for directing the Icepick towards a gas station. Once there, Icepick clear our the area and are directed away by Watcher issuing orders. After Watcher has moved them across the street, they prepare to breach the front door of the gas station and secure it for themselves. After the gas station is secured, two Russian trucks filled with troops park outside the said station and begin to assault the three men inside. After the Russians have been handled Icepick exits out the backdoor of the station.

After this is done, the player regains control of Watcher and must carefully guide Icepick through a small maze that is filled with enemy patrols. After this is completed, the trio reaches an overlook where they take up multiple sniping positions in order to being a firefight with multiple Russians. After all of the hostiles are eliminated, control is once again returned to Watcher.

Watcher must not only eliminate enemy armor with the help of other air support, but must find secure paths for Icepick as they navigate the Russian base. Eventually Icepick will reach the warehouse, where they breach and begin fighting Russian troops. Several catwalks must be cleared before Icepick makes it to the ground floor, where they regroup and contact Watcher, giving him the Intel on all of the different equipment that has been discovered.

Vargas under a window as it is blown out. 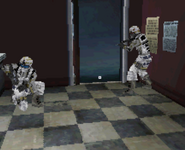 Brewer and Vargas as they leave the Gas Station.

Brewer, Vargas, and Wilson prepare to breach a Gas Station.

Picture of the Russian Base.

Vargas and Brewer as they breach the Warehouse.

Shot of the Warehouse overhang that overlooks some Russian combat equipment.

Vargas and Brewer in front of a large crate that contains Russian equipment. 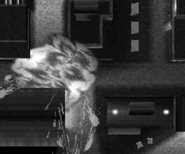 Watcher calls for a strike on a Tank.

Overhead view of the Gas Station. 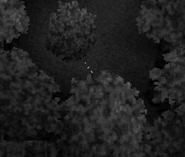 A Russian Convoy lets troops out as Icepick hides.

Watcher guiding Icepick between enemy patrols.
Add a photo to this gallery

Retrieved from "https://callofduty.fandom.com/wiki/Overwatch_(Modern_Warfare_3:_Defiance)?oldid=2504730"
Community content is available under CC-BY-SA unless otherwise noted.