For other uses, see Ozone.

"I got eyes on! Here they come! They're in the field to the south-east!"
— Ozone, during the Ultranationalist counter-attack in "Loose Ends"

Ozone was an American soldier and member of Task Force 141 featured in Call of Duty: Modern Warfare 2.

Ozone's primary appearance in the game is as part of the team that raids Makarov's safe house in "Loose Ends". Along with Ghost, Scarecrow, and Roach, he survives the initial ambush and moves to breach and clear the safe house. The player can choose between one of three breaching points around the house; Ozone places himself at the main floor's side-door deck entrance. While protecting the safe house from enemy forces, Ozone guards the basement entrance from the outside. However, he may or may not be killed in the subsequent fighting, as he is not scripted to die, but is not invincible either. It is very hard to keep him alive in this initial position due to the open area in which he is located. Enemies will flank him from behind him and the side, outnumbering him significantly. He will only survive the first position if the player assists him but he may still die even if the player protects him.

Once Archer alerts the team to another wave of enemies approaching from the opposite side of the house, Ozone will relocate inside and hold off enemy forces from the front windows. He will stay in this position until the DSM finishes downloading. While he can still be killed at this point, it is much more rare due to the amount of cover he has. If he is still alive when the DSM finishes downloading, Ozone will follow Ghost, Roach, and (if still alive) Scarecrow to the extraction point. It is nearly impossible for them to survive exiting the building, due to the large amount of enemy troops and their low health by this point.

Assuming they survive getting down the hill, they are both scripted to die in the mortar strike that badly injures Roach. This is generally considered their canon death. 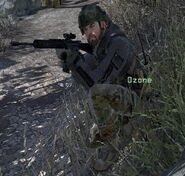 Ozone's dead body.
Add a photo to this gallery
Retrieved from "https://callofduty.fandom.com/wiki/Ozone_(Modern_Warfare_2)?oldid=2509800"
Community content is available under CC-BY-SA unless otherwise noted.