For the similarly named aircraft, see A-10 Thunderbolt II.

In Call of Duty: United Offensive, the last two American missions involve the P-47 covering the player and helping the destruction of the remainder of a German platoon in the last mission.

Near the end of the mission "Noville", the player must defend a house from incoming Panzer IVs using Panzerschrecks. After several minutes, a squadron of P-47s come in and destroy the remaining Panzers.

The Thunderbolt appears for a few times. Some can be seen towards the end of the campaign mission "The Dragon's Teeth".

The P47D Thunderbolt can be seen in most missions supporting the Allied forces. It's first seen at the beginning of the mission "Saint-Lô" when three of them fly over shot down a German fighter , "Mayenne Bridge" one crash on the river the player is about to cross. Some are seen flying over the river and one chase a Stuka around the bridge near the first bomb where it shot the Stuka before flying away. In The Crossroads, when it shot down, a Stuka will crash into the building the player is in after planning to take out a Flakvierling.

The P-47 Thunderbolt appears in most missions of the campaign of Call of Duty: WWII. It is the main fighter aircraft of the United States Army Air Force and can be driven in the level "Battle of the Bulge as the player assumes control of 2nd Lt. Matthew Weber.

A destroyed P-47 in "Operation Cobra".

The P-47 serves as the model for the Fighter Pilot scorestreak in multiplayer for the Allied Powers. It is also the playable aircraft for the Allies during the dogfight section of the War Mode map Operation Husky. 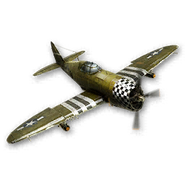 The P-47 in the scorestreak menu icon
Community content is available under CC-BY-SA unless otherwise noted.
Advertisement