The P-LAW is an energy launcher featured in Call of Duty: Infinite Warfare.

The P-LAW can be found in the armory in Operation Taken Dagger, prominently positioned by a suit upgrade console. Once scanned into the player's inventory, it can be accessed as a secondary heavy weapon for loadout selection.

The P-LAW is useful for taking out groups of both robot and human enemies, and even holds its own against R-C8 and C12 units.

The P-LAW is unlocked at level 20.

The P-LAW is available from the Magic Wheel for 950 points. It is available for customization at level 26. When Pack-a-Punched, it becomes the Knight's Rider.

The P-LAW in first person. 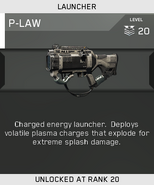 The P-LAW being unlocked in multiplayer.

Reyes inspecting the P-LAW.
Add a photo to this gallery

Retrieved from "https://callofduty.fandom.com/wiki/P-LAW?oldid=2471602"
Community content is available under CC-BY-SA unless otherwise noted.