The P226 is a semi-automatic pistol that appears in Find Makarov: Operation Kingfish and Call of Duty: Ghosts.

The P226 is used by John "Soap" MacTavish and John Price when assaulting one of Kingfish's safehouses. After the team evacuates the building and tries to leave, Price holds off the enemies with his P226.

The P226 is a common starting weapon, appearing in the initial loadout in No Man's Land, Legends Never Die, The Hunted, Atlas Falls and End of the Line, often with a Silencer. It is also used by Federation troops as their secondary weapon in almost all ground missions (except Brave New World, where they use the M9A1 instead, and Severed Ties and The Ghost Killer where it is replaced by the MP-443 Grach). Rorke carries an empty P226 in No Man's Land too, and uses it to make Ajax think he was about to execute him.

The P226 is one of the pistols unlockable in Multiplayer, and comes by default in the Stealth class setup, and is equipped with a Silencer on this setup by default.

The P226 requires 5 points to unlock, making it one of the more expensive pistols to unlock. The P226 has the second highest firecap of all pistols, just beaten out by the MP-443 Grach. However, its largest strength lies in its two-shot kill range, which extends to just over 10 meters, and the three-shot kill range extends to about 15 meters, which is higher than any non-revolver handgun in Ghosts. Nonetheless, Muzzle Brake is highly recommended on this weapon to increase the extent of its two-shot kill range. It has a very large magazine size at 14 bullets per mag, which is also the best in its class. This also makes Extended Mags a deadly attachment on this weapon, allowing it to hold 21 bullets in a single mag. The recoil, however, is extremely high, which may make it less friendly for trigger spamming. Its reload time is rather slow compared to the other pistols, which effectively balances out the large magazine capacity.

In conclusion, the P226 can work as a very effective backup weapon for many different scenarios, and many players rely on this for CQC situations, such as a dedicated sniper, or someone with a LMG that needs an alternative at close range. The P226 can fill all of those roles successfully, and the popularity of its usefulness is reflected upon by many players.

The P226 appears in Extinction as the first pistol unlocked. It has the highest range of the handguns, and the second highest damage (only being trumped by the .44 Magnum). It has a decent magazine size of 12, which increases to 18 when the second pistol upgrade is acquired. It has a decent reload time, slower than the other automatic pistols but faster than the .44 Magnum.

The P226 is a decent sidearm that will serve beginners well. The P226 provides a large magazine relative to its per-shot power. With enough power upgrades, the P226 has a chance to instantly kill a Scout. However, the P226's power and range advantages over handguns such as the M9A1 and the MP-443 Grach are often moot, as those weapons can also get one shot kills on Scouts with sufficient power upgrades, while also providing more ammo per magazine and more ammo overall, plus superior accuracy and damage outputs. As a result, despite being the starter pistol, the P226 is one of the rarer handguns to see players using in Extinction. While far from unusable, many prefer other handguns.

The P226 is also David Archer's weapon of choice after his arm is cut off by Samantha Cross.

It is also used in Chaos Mode as the starting pistol all players get, even if they have selected a different pistol for normal Extinction mode. It acts the same as the version from normal Extinction and cannot be traded out. It makes for a decent backup weapon, and would even be decent for using as the player's primary weapon, but due to its limited ammo it may be best kept for situations where the player runs out of ammo for their primary gun and cannot get to another weapon pickup fast. 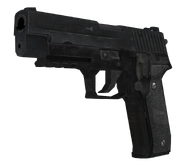 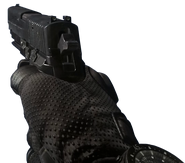 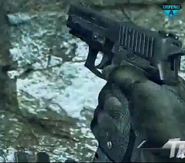 The P226 with suppressor, tactical knife and wrist-mounted Heartbeat Sensor in "The Hunted" 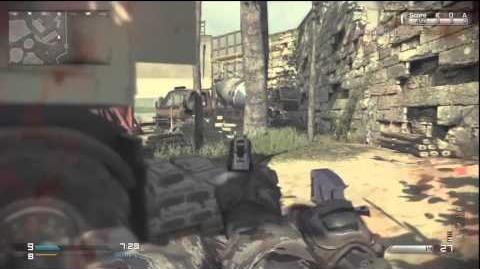 CALL OF DUTY GHOST Pistol and tac knife free for all
Using the P226 in Call of Duty: Ghosts with a Tactical Knife.