In the campaign, the P90 is a rare weapon only used occasionally by the Russian Ultranationalists in the later levels of the game. It can be found most commonly in "Heat", "All Ghillied Up", and "Mile High Club", but can also appear on other levels of the game. Typically, the weapon is found unsuppressed and with iron sights. However, one can be found with a Suppressor and Red Dot Sight in "All Ghillied Up" labeled as "P90-SD".

In multiplayer, the P90 is unlocked at Level 40. It can be modified with a Silencer, Red Dot Sight, or ACOG Scope, like all other submachine guns. The P90 has a 50 round magazine and a very high rate of fire. Due to its extremely large magazine, it is also the weapon able to carry the most maximum ammunition in the game, barring LMGs.

The P90 deals 30-20 damage, killing in 4-5 shots depending on range. Stopping Power reduces bullets needed to kill to 3-4 shots. Head shots generally reduce the number of bullets needed to kill by one. The combination of its rather weak bullets and a slower rate of fire than the Mini-Uzi make the P90 the slowest-killing SMG at close range. However, it is a strong SMG at medium to long ranges due to its low recoil and high rate of fire, especially when firing in short bursts.

The P90's recoil profile is 60 upward and to the left, 70 to the right, and 30 downward. These rates are average to low for submachine guns, and are aided by a high center speed of 1700. Reload speeds for the P90 are nominally slow for submachine guns, but the P90 benefits substantially from reload cancelling. In addition, the need for reloads is relatively infrequent due to the large magazine size. Wall penetration power is low and typical for most submachine guns.

The large magazine of the P90 confers multiple advantages. Despite its weaker power at close range, the P90 is more forgiving to inaccurate users. It also allows users to take on multiple foes without having to reload. Finally, the large ammo supply means that the Bandolier perk is less necessary than for other submachine guns.

The P90 has the slowest raise/drop times among all submachine guns, making it a poorer choice as a secondary weapon or for Overkill than other submacine guns.

The P90 appears in Old School Mode with 100 rounds in the magazine and 50 rounds of reserve ammunition.

The P90-SD available in the campaign

The P90 can be found in the Campaign in "Loose Ends", "Just Like Old Times", "Contingency", "Of Their Own Accord", "Exodus", "Second Sun", "Cliffhanger", and "Whiskey Hotel". It is also found in the Special Ops missions in Sniper Fi and Estate Takedown.

The moderate recoil, high rate of fire and moderate damage make the P90 a very good choice at close range and even medium range. The high rate of fire makes hip-firing especially effective, as well as making up for the lower than average base damage. The weapon's iron sights may not suit everyone as they can seem bulky to some players but seem slimmer to the Call of Duty 4: Modern Warfare counterpart probably due to a more detailed weapon model. Among all the submachine guns in Call of Duty: Modern Warfare 2, the Extended Mags attachment is perhaps achieved easiest by the P90, due to its large magazine size. This attachment also increases the player's sprint time to 7 seconds as opposed to the standard 4; this was patched on consoles, but is still the cases on PC.

Weapon camouflage is visible on the back and front of the P90, as the magazine is not camouflaged as with its Call of Duty 4: Modern Warfare counterpart, but easier to see when reloading, using Akimbo, or using a sight.

In Core game modes, the weapon can kill enemies in four-to-five hits, three-to-four with Stopping Power active. In Hardcore, the P90 takes down targets in one-to-two shots with or without Stopping Power, so a different Tier 2 perk is advised. This means that outside of its three-hit kill range (one-hit kill range in Hardcore), it is generally less effective than the UMP45 and consequently less used than said weapon. 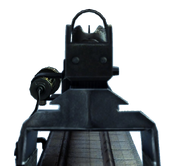 The P90 in third person

Coalition, SAS, USMC
Call of Duty: Modern Warfare: Mobilized features the P90 as one of the four submachine guns available in game, the others being the MP5, the MP7, and the Skorpion.

In the campaign, the P90 is used only by the SAS and USMC. It is a starting weapon in "Oil Rig Confrontation", "Winter Assault", and "Last Chance". The weapon always has an integrated Red Dot Sight but it is slightly misaligned: the real point of impact is slightly above the red dot. It has a slightly lower rate of fire than in the console versions, but has higher damage per bullet.

In multiplayer, the P90 is unlocked after getting 300 kills with the Coalition faction. It is the third weapon of the Coalition faction to be unlocked, following the AA-12 and preceding the M249 SAW. It has the same stats of its campaign counterpart but with slightly lower damage, and its Red Dot Sight is still misaligned.

The P90 in Call of Duty: Modern Warfare: Mobilized

The P90 was first spotted in the reveal trailer of Call of Duty: Modern Warfare 3, near a turnstile a British SAS soldier is vaulting over. The P90 was also seen shortly in the E3 demo of Call of Duty: Modern Warfare 3. It is seen being used by the enemies in the mission "Mind the Gap", with or without a Silencer, Red Dot Sight or Holographic Sight. Spetsnaz soldiers use the P90 in "Black Tuesday". Spetsnaz soldiers also commonly use the P90 in "Scorched Earth". It also used by Makarov's bodyguards in "Dust to Dust". It has a high rate of fire and medium recoil.

The P90 is a moderate damage per bullet SMG. At any range short of fifteen meters, the P90 will deal 42 damage, taking three shots to kill, or two shots if one of the bullets had hit the head. Damage will decrease rapidly in a linear fashion until about nineteen meters, where the P90 will now deal just twenty damage per bullet, dealing just twenty damage, mandating five shots to kill, or four shots if at least two of the bullets had hit the head, two shots in Hardcore, or one shot if the bullet hits the head. In the SMG tier, this is rather average, not showing an explicit weakness nor strength in its power when compared to other SMGs. The P90 has low penetration power; players will usually require the use of Impact to shoot through moderately thick walls, but the P90 is still decent at shooting through thin walls, like the fence door on Resistance.

The P90's recoil profile is quite manageable. The P90's recoil usually goes up and a tad to the right. Thanks to the moderate fire rate, the lower recoil numbers compared to other SMGs, and a solid 1650 centerspeed, the P90 has a key accuracy advantage over other SMGs. Like other SMGs, the P90 has poor idle sway values, swaying at a speed of 3 degrees and has an idle sway amount of 35. The P90's iron sights are simple but may not appeal to some since the sights are thick and have some gunkick when firing.

The P90's handling characteristics are actually quite impressive among SMG's. The P90 has the typical 100% movement speed (eighty percent when aiming as well), its hipfire crosshairs are among the best in the game, and the P90 has among the best reload speeds of all SMGs, taking 2.76 seconds to do a partial reload, 3.5 seconds for an empty reload, and in both cases, a 1.77 second Reload Cancel time. The reload cancel time is the best speed possible on an SMG, and this is a great stat since it plays well into the P90's magazine capacity advantage.

The P90 has the typical attachment selection for SMG's at hand. The optical attachments prove to have little worth on a close range weapon, while the ACOG Scope and Thermal Scope are almost counter-intuitive to the P90's playstyle through the effects of lowering recoil, reducing the field of view, and not giving any tangible benefits in close quarters.

The Silencer reduces the P90's effective range by 25%, making the P90 begin to drop off at roughly eleven meters, and linearly decrease in damage until reaching fourteen meters. In return, the user will not show up on enemy mini-maps when firing the P90, the P90 produces less muzzle flash, and the P90 will leave less of an acoustic signature when firing. Considering that Modern Warfare 3 has a lot of closer ranged maps and that the Range Proficiency can return the range to its normal values when using a Silencer, the Silencer's disadvantages aren't as well pronounced and makes the rewards easier to reap.

Rapid Fire boosts the P90's fire rate to 1071 RPM. One of the P90's weaknesses as an SMG is its fire rate, and equipping Rapid Fire solidifies the P90's lethality at close range, and makes close quarter skirmishes all the more easy. However, recoil is much more pronounced with this attachment equipped, so the attachment can limit the range a user may be comfortable with spraying with the P90.

The P90 is available in Survival Mode at level 46 and costs $2000. Because of its large magazine size, the P90 is very effective in Survival Mode. In very close ranges, the P90 can kill a Juggernaut in less than one magazine, if most of the shots are to the head. Since it is so cheap and it packs power to kill lots of enemies with ease due to its high ammo it is extremely good value for money.

An SAS soldier aiming with his P90 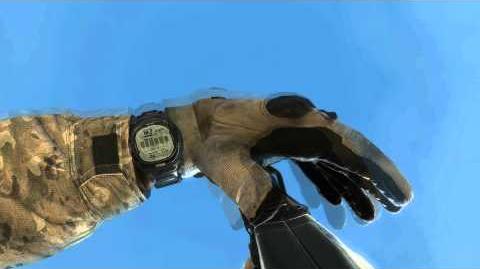 The P90 returns in Call of Duty: Modern Warfare 3: Defiance. Like in the previous game, it comes with an integrated Red Dot Sight.

The weapon in first person

Ramirez with the P90

Automatic
The P90 returns in Call of Duty Online as the PDW90.

The PDW90 with a Laser and Holographic Sight

The P90 makes a brief return in the mission "Clockwork", however, it is not usable. A pair of P90s appear as an automated turret towards the end of the mission.

The turret that appears in Clockwork, made up of a pair of P90s

The P90 returns in Call of Duty: Modern Warfare. It is manufactured by FORGE TAC.

The P90 in the weapon selection menu

The P90 in first person.

The default Iron Sights of the P90.

Ghost uses a P90 in the Battle Pass Comics. However the P90 is currently not available for use in-game

Ghost's P90 has an extended barrel, a Monolithic Suppressor, and a FSS Ring sight

CoD MW2 Free-For-All Terminal P90 Silencer No Commentary
Gameplay with the P90 in Call of Duty: Modern Warfare 2 with a Silencer.