The PDW-57 is often seen being wielded by the Mercs and the SDC, and is the recommended primary weapon in "Karma".

The PDW-57 is unlocked at level 4, along with Create-A-Class and a slew of other weapons and perks.

The PDW-57's rate of fire is slow for an SMG, firing at 750 RPM. This is still a decent fire rate, but it is nonetheless the worst among SMGs, and it is one of the PDW-57's weaknesses.

The PDW-57's handling characteristics are poor for an SMG, but decent overall. The PDW-57 allows users to move at 100% of the base movement speed, and strafe at 80% of the base movement speed. The PDW-57 allows users to aim down the sights in 200 milliseconds. Due to a patch, the PDW-57 has the worst hip-fire accuracy in its class, with hip-fire accuracy similar to the Executioner, but it is still decent overall. The PDW-57 also has the worst reload speeds in its class. The PDW-57's reload animation is 2.6 seconds long, or 3.2 seconds long if the magazine is completely empty. In either case, the PDW-57 can Reload Cancel after 1.7 seconds. The reload animations are by far the longest in its class, although those that can properly reload cancel will only suffer barely slower reload speeds than other SMGs. Those that can't reload cancel efficiently will experience very slow reload speeds.

The PDW-57 has the usual assortment of attachments available on offer. The optical attachments aren't of much use on the PDW-57 due to its clean iron sights and lack of long range competence.

The Suppressor reduces muzzle flash, makes the PDW-57 quieter when firing, and prevents the PDW-57 from making the user appear on radar when firing the weapon, at the expense of reducing all of the PDW-57's range thresholds by thirty percent, as well as reducing the centerspeed to 1274. The centerspeed reduction is negligible, but the range reduction makes the attachment's value on the PDW-57 highly suspect, as two of the PDW-57's defining characteristics are its ability to get a three shot kill, in addition to its superior range values relative to most other SMGs. The Suppressor is a bit of a misfit on the PDW-57, but it can still be valuable.

Fast Mag allows the user to reload much faster. This fixes one of the PDW-57's handling woes and makes reloads lightning quick. However, the attachment isn't necessary thanks to the large magazines and the reload cancel speed being decent. Extended Clip increases the magazine capacity to 65 rounds, and increasing the starting ammo loadout to 260 rounds. This will increase the PDW-57's sustained fire capability even further, but at the expense of making reloads ten percent longer. Neither attachment is a mandate on the PDW-57 due to its enormous magazine and average reload speed.

The Adjustable Stock increases the PDW-57's strafe speed to 100%, allowing the user to move at the full movement speed while keeping the sights raised. This attachment is unnecessary, as the PDW-57 by default can already strafe at a speed on a level similar to assault rifles with the Adjustable Stock equipped.

FMJ increases the PDW-57's penetration power, allowing it to shoot through objects more efficiently. Due to the PDW-57's enormous magazines, it is well suited to spraying through cover, which is needed due to cover reducing the damage dealt. The PDW-57 will also deal more damage to scorestreaks, allowing to make quicker work of smaller scorestreaks. The attachment is without penalty, but its benefits need to be properly utilized for it to be worth the point spend.

Select Fire gives the PDW-57 a three round burst alternative fire mode. When firing in bursts, the PDW-57's overall rate of fire will be reduced to 661 RPM due to added burst delay. In exchange for the slower fire rate, the PDW-57 gains an enormous centerspeed increase, going from 1300 to 1650. In combination with the burst delay slightly lowering the fire rate, the PDW-57 will become significantly more accurate overall, highly improving its medium to long range performance. With smart usage of the fire modes for when the situation calls for it, Select Fire can make the PDW-57 much more versatile.

Rapid Fire makes the following drastic changes to the PDW-57:

These changes make the PDW-57 borderline unusable beyond close range combat, as the damage drops off very quickly, and the combination of increased fire rate and reduced centerspeed make the PDW-57 incredibly inaccurate. Even in close quarters, three shot kills aren't consistent, and the hip-fire spread is made quite large. Attachments like Long Barrel, Select Fire, or Laser Sight can try to counteract these weaknesses, but none of these attachments can fully undo the damage the negative side effects Rapid Fire has on the weapon. The attachment has far too drastic of downsides to be of use.

The PDW-57 is very similar to the MSMC. Both SMGs have the ability to pull off a three shot kill, fire at 750 RPM, have poor accuracy due to a poor 1300 centerspeed and inflated recoil values, both have larger hip-fire spreads, and both are saddled with some of the slowest reload speeds among SMGs. The PDW-57 has a much larger magazine capacity and starting ammo loadout, with both values being forty percent larger than the MSMC's. The MSMC is superior in most other aspects however, with longer range, more predictable recoil due to much less horizontal recoil, a superior movement speed, and a slightly faster reload speed. In essence, the MSMC is superior on a per-bullet basis, but the PDW-57 has far better sustained fire capability, in addition to a much larger starting ammo loadout.

March 12's patch increased the recoil of the PDW-57 and also increased its hip fire spread slightly. The same occurred with the MSMC.

The PDW-57 appears as a wall weapon in Die Rise (located next to the elevator shaft) and Buried (placed in six predetermined locations from the Gunsmith shop). It also appears in Mob of the Dead, Cell Block, and Origins in the Mystery Box. The gun costs 1000 points. The PDW-57 has a reduced ammo capacity from 350 reserved rounds to 200 reserved rounds. Although it has a good rate of fire and a large magazine, it runs out of ammo quickly. Speed Cola can mitigate the reload time, as does Electric Cherry perk as it momentarily protect players during the reloading process. Double Tap Root Beer is optional as it will benefit from double damage, but can burn through ammo and raise recoil two-fold.

When Pack-a-Punched via the Pack-a-Punch Machine, it becomes the Predictive Death Wish 57000. It has a 50-round magazine with 350 reserved rounds and can be Pack-a-Punched multiple times to cycle through different attachments such as the Reflex Sight, MMS, and Target Finder. It still runs out of ammo quickly, however. This problem is mitigated slightly in Die Rise and Buried, as upgraded ammo can still be bought off the wall; in Mob of the Dead and Origins however, the weapon's restriction to the Mystery Box makes its short ammo supply more of a hindrance. 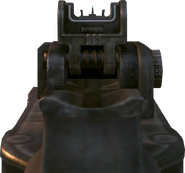 PDW-57 in third person with Suppressor and Laser Sight attached

The PDW-57 returns in Call of Duty: Mobile.

The PDW-57 deals low damage with high rate of fire. However, it also has rather hard-to-control recoil pattern and obtrusive iron sights. What differs the gun from its peers is the large magazine capacity that cannot be extended, and the increased range it has, making the gun a rather dangerous SMG at mid range.

It deals low damage, but is compensated by the insane rate of fire it has. It also features tight hip fire spread as an SMG, allowing close-quarter gunfights more flexible. The gun was removed from Battle Royale as a floor weapon, but can still be used as a customized weapon found inside Airdrops.

The PDW-57 in first person 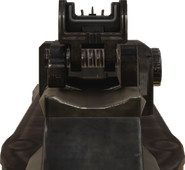