For another variant, see PKP Pecheneg.
For a similarly named weapon, see RPK.

The PKM was added on March 14th, 2017 with Operation Lion Strike. It becomes available at all levels once unlocked via the completion of the PKM Bounty.

The PKM features a 100-round belt, same as the other belt-fed LMGs available in the game. Like the M60E4 and the Bered MK8, its damage drops off over range, making it a 3-4 shot kill depending on distance. Equipping Stopping Power increases this to a 2-3 hit kill. At long ranges, scoring a headshot reduces the amount of bullets needed by 1. Its range is very long, so most engagements on a majority of maps should fall within effective range for typical players. Reload speed is also slightly faster than that of other belt-fed LMGs at 8 seconds instead of 10, though 8 seconds is still very slow, so Sleight of Hand is useful. The rate of fire, however, is fairly low, but faster than M60E4 and the STG-44. On paper, PKM has the best accuracy of light machine guns, it is more stable than M60E4 and RPD when firing.

The PKM has standard attachments of light machine guns, the gun works fine no matter the attachments are equipped or not.

Overall, the PKM is an attractive and versatile weapon that is worth unlocking if players have Parts to spend.

The PKM in first person 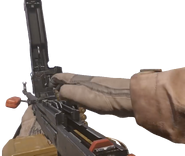 The PKM returns in Call of Duty: Mobile. It was added in December 2021 as part of the Season 11: Final Snow update.

The PKM returns in Call of Duty: Modern Warfare

In the campaign, every enemy faction uses the PKM; it is also used by a Juggernaut during the final level "Into the Furnace". Some versions can be found modeled after the "Standard Issue" blueprint from multiplayer.

The PKM in first person.

The default Iron Sights of the PKM.