The PM63 is used extensively by the Spetsnaz in the campaign level "Executive Order." The weapon is found specifically during the assault phase on the launch facility. It can be found with Extended Mags, Dual Wield, or with no attachments, but never with any camouflage pattern, unlike some of the AK-47s found on that level. In "Numbers", a PM63 with Dual Wield can be found in the first weapons cache, but nowhere else in the level. The PM63 also makes a brief appearance in the level "Crash Site" in the hands of the Soviet Spetsnaz, who exclusively use it in that mission.

The PM63 has a high rate of fire, at 937 RPM. This offsets the poor damage per bullet somewhat.

The PM63's accuracy is subpar for an SMG. The iron sights are extremely clear, and the recoil per shot isn't too bad, with the recoil most drifting up and to the right. The principle issue with the PM63 is with the centerspeed, at merely 1500. Most other SMGs have a centerspeed value of either 1600 or 1700, with some even having the same recoil profile of the PM63. As such, the PM63 is a little lackluster in this aspect.

The PM63's handling characteristics are great overall. The PM63 allows the user to move at 100% of the base speed, aim down the sight in a swift 200 milliseconds, the PM63 has a tight hip-fire spread, allows the user to strafe at an 84% speed, and reloads are swift for the PM63.A normal reload takes 2.05 seconds, or 2.85 seconds if the magazine is empty. In either case, a Reload Cancel can be performed in 1.4 seconds. This is one of the fastest reloads amongst all primary weapons.

The PM63's big weakness is in its poor magazine capacity, at a mere twenty rounds. When combined with the poor damage per bullet and high rate of fire, the PM63 is very ammo inefficient, and ammo reserves will deplete quickly. The low magazine capacity also leads to the PM63 having a mere eighty bullet starting ammo loadout. Ammo can run out extremely quickly for the PM63. As such, Scavenger is highly recommended when using the PM63.

Extended Mags will increase the capacity of the weapon from 20 rounds to 30. This attachment greatly benefits the weapon, as the short magazine of twenty rounds is one of the weapon's key weaknesses. However, the player will not receive increased starting ammunition unless paired with Scavenger Pro.

The Grip increases the PM63's centerspeed to 1600. This makes the PM63 more accurate, as the weapon will more quickly re-center between shots. The Grip has no downside to it, and it addresses a weakness that the PM63 has relative to other SMGs in its class.

Dual Wield removes the ability to aim down the sight and makes the hip-fire crosshairs much larger, but doubles available firepower. The loss of ability to aim down the sight, in conjunction with the heavily increased hip-fire spread, make the PM63 significantly more difficult to use at medium ranges, and next to useless at long range. Of all the SMGs that can utilize Dual Wield, the PM63 is perhaps the worst, as it has one of the lower centerspeed values, and it doesn't have medium penetration power like the Kiparis. Oddly enough, Dual Wield also slightly speeds up reloads and switch speeds.

Rapid Fire increases the rate of fire of the PM63 from 937 rounds per minute to 1250, making for a more deadly weapon up close. This comes with a cost of increased ammo consumption and recoil, making Scavenger and Sleight of Hand almost essential for prolonged use.

Overall, the PM63 is very similar to the MAC-11, another SMG with a short 20 round magazine and the option to Dual Wield. Unfortunately, the PM63 is almost completely outclassed by the MAC-11, as the MAC-11 not only has a wider attachment selection with access to the Suppressor and optical attachments, but the MAC-11 also has 200 extra centerspeed compared to the PM63, and faster switch speeds, while matching the PM63 in almost all other aspects. The PM63's only tangible advantage over the MAC-11 is a faster reload speed. As such, the PM63 is tough to justify using.

The PM63 appears in Zombies and is available from the wall for 1000 points. Its high rate of fire and decent power make it good for the early rounds, however its small magazine and low ammo reserve are liabilities, even in the early rounds, as it drains ammo quickly. Other SMGs, such as the MPL, AK-74u, MP-40 and the MP5K are generally more popular due to their larger ammo supply at the same cost, but the PM63's faster rate of fire makes it better for close range.

When Pack-a-Punched, it becomes "Tokyo and Rose". Tokyo and Rose is Dual Wielded, effectively doubling the magazine size. However, like every Dual Wielded weapon, the player can no longer ADS, and the large spread means that most shots will not hit the target, unless dangerously close, hence it is recommended to buy Deadshot Daiquiri if one plans to use these guns. Ammunition is drained at double the rate with these weapons, and due to its aforementioned weaknesses, is often ignored in the Zombies game mode, in hopes of obtaining more reliable weapons.

PM63 vs Tokyo and Rose

The PM63 in first person

Diving with the PM63.

Side view of the PM63

The PM63 in Call of Duty: Black Ops Zombies

The PM63 returns in Call of Duty: Black Ops Cold War as the AMP63, now being classed as a pistol rather than a submachine gun. It was added on June 1st, 2021 as part of the Season Three content for the game.

The AMP63 can be brought into any map via Create-A-Class, at Loadout rarity. When upgraded via the Pack-a-Punch Machine, it becomes the Doom, gaining increased damage and a base 25 round magazine paired with 425 rounds in reserve. If upgraded whilst using the Dual Wield attachment, it becomes the Doom & Gloom.

Promotional image of the AMP63.

The AMP63 in first person.

The default Iron Sights of the AMP63. 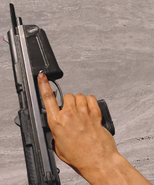