The PP2000 is the standard sidearm for the Russian Forces, and can be commonly found in all Rangers missions that take place in North America. When a Russian soldier goes into last stand, they might pull out a PP2000. It is inadvisable to use this weapon, as almost every other weapon has a higher magazine capacity and higher power, and, by extension, is a better choice for a back up.

The PP2000 has high close range damage, low recoil, moderate rate of fire, and high hip-fire accuracy which makes it extremely effective in close range. Its low recoil makes it effective even up to medium range. The PP2000 is an excellent secondary for snipers and players who often run out of ammunition for their primary weapons.

However, it does have a minor shortcoming: it only uses a 20-round magazine. While not as much of a problem as the TMP's 15-round magazine, it is often difficult to kill more than one enemy with one magazine. Reloading often can mitigate this flaw. Its small magazine makes the Extended Mags attachment very desirable.

Because the PP2000's iron sights are very clear and open, optical attachments are largely superfluous. Therefore, other attachments such as a Silencer or Extended Mags are recommended. Akimbo is also a questionable attachment due to poor hipfire accuracy and small magazines. Steady Aim helps this situation, but with the large cross-hairs to begin with, the accuracy is only slightly improved.

For players using Bling Pro, a Silencer and Extended Mags are a potent combination, turning the already powerful and accurate PP2000 into an incredible stealth weapon. Such a combination can be extremely effective in game modes like Search & Destroy.

While Stopping Power is useful for the PP2000, the effects are best at close range, where it will kill enemies in two shots in normal circumstances and four at its minimum damage range. Stopping Power is particularly useful considering the PP2000's low ammo capacity, although other tier 2 perks are still viable options.

When switching to it for the first time, the player character flips the safety switch. Whilst this action takes less than a second, if a player waits until the last second to pull the PP2000 out, it can be detrimental as it cannot be fired until this action is completed. A good way to avoid this is to switch to it upon spawning, so when the player switches to it afterwards, the draw animation is much quicker.

The PP2000 makes for a good secondary in Hardcore, as it is a one shot kill at close range, and two at medium to long range. This ties with most secondaries, but the PP2000 has a high rate of fire and low recoil. It also makes a good silenced weapon, as in most cases the kill will be in the two-hit-kill range regardless. 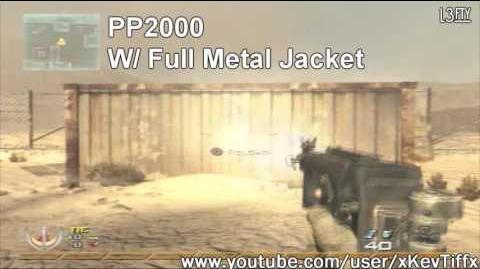 The PP2000 was scheduled to appear in Call of Duty: Modern Warfare 3, but it was cut. However, an unused menu icon can be found in the game files. However, the firing sound of the PP2000 Is used on the world model of the PP90M1

The same icon from Modern Warfare 2.

The PP2000 was cut from Call of Duty: Modern Warfare Remastered[1]. The weapon is usable and complete, indicating it was cut fairly late in development.