The PP90M1 first appears in  "Hunter Killer", where it can be found with or without a Red Dot Sight. It can also be found with a silencer. It is also found in the mission "Turbulence", carried by Makarov's men and the FSO . It is also seen wielded by Russian forces in "Mind The Gap", "Goalpost", and African Forces in "Back on the Grid" and "Return To Sender". Is it also seen on floor rarely by the fallen GIGN Soldiers in Bag and Drag.

The PP90M1 is available from start in the Grenadier default class, but is not unlocked until level 28.

The PP90M1 has an absurdly severe and sudden damage drop, as the difference between a three shot kill and a six shot kill is less than four meters of range difference. The PP90M1 is the only SMG with the potential to need six hits to kill. The PP90M1's maximum damage range is decent and on par with other SMGs, but the PP90M1 reaches its minimum damage range very quickly afterwards. Users need to be very cognizant of the limits of the PP90M1's range, and users that can't pick their battles well will find the PP90M1 to be very ineffective in some circumstances.

The PP90M1 confers a 50% damage boost with a headshot, and will usually ensure that one less shot is needed to kill. However, the PP90M1 is the only SMG where a headshot is not guaranteed to get a one shot kill in Hardcore game types. The PP90M1, like other SMGs, has poor penetration power, so users would be wise to avoid shooting through surfaces with this weapon.

The PP90M1 offsets its low minimum damage with a very high rate of fire. The PP90M1 has the second highest rate of fire of all SMGs, clocking in at 1016 RPM, equal to the FAD and the G18. This is one of the highest rates of fire in the game, only being bested by the FMG9 and the PM-9 among vanilla fully automatic weapons. This rate of fire is great, and it makes the PP90M1 very competitive in CQC. Compared to the PM-9 - another fast firing SMG - the PP90M1 has a far superior three shot kill range and four shot kill range.

The PP90M1's handling characteristics are slightly below average for an SMG, although solid overall. The PP90M1 allows users to move at 100% of the base speed, strafe at 80% of the base speed, aim down the sight in 200 milliseconds, and the PP90M1 has good hip-fire accuracy, making it even more friendly for CQC usage. The PP90M1's reload speeds are some of the worst in-class, however. The PP90M1's reload animation is 3.03 seconds long, or 3.97 seconds long if the magazine is empty. The user can Reload Cancel the PP90M1 after 2.06 seconds. 2.06 seconds is a slow reload cancel speed, being only faster than the MP7 and the PM-9 in its class. In the grand scheme, the PP90M1's reload speed is very slow, and will leave the user very vulnerable. Sleight of Hand will be hard to ignore.

For weapon proficiencies, Range is the most lucrative option on the PP90M1. The PP90M1 is the only SMG that can take up to six shots to kill, and users should avoid that by any means necessary. Using Range will help in such an endeavour, increasing the PP90M1's three hit kill range even further, while also lengthening the four shot kill and five shot kill ranges. Using Range allows users to take full avantage of the PP90M1's powerful blend of range and fire rate. Attachments is a very solid choice, as it allows users to combine some of the powerful attachments that SMGs have on offer. Attachments is the way to go if using the Specialist Strike Package, as the benefit of a second attachment cannot be gained through the Specialist Bonus, whereas all other proficiencies available to the PP90M1 can be earned in such a manner.

The PP90M1 has the usual assortment of attachments available to an SMG. The PP90M1's iron sights are extremely clear and the PP90M1 is a close range weapon at heart, so optical attachments will be of little benefit to the PP90M1, although they should still be used in order to complete attachment challenges to earn more weapon XP for the PP90M1.

The Silencer is an awful choice for the PP90M1. The Silencer reduces the PP90M1's three shot, four shot, and five shot kill ranges by 25%, making six shot kills more common. The PP90M1 is the one SMG that needs to maximize its range the most out of all SMGs. Cutting into the PP90M1's range will exacerbate the PP90M1's greatest weakness. If the user wants the stealth benefits conferred by a Silencer, it'd be best to simply use a different SMG in conjunction with the Silencer. None of the other SMGs will ever require six shots to kill, making them much better fits for Silencer usage.

Rapid Fire is a very powerful attachment on the PP90M1, as it tends to be on all SMGs. The PP90M1's rate of fire increases to 1276 RPM, making the PP90M1 even more deadly. The lesser time between shots will cause recoil to compound more easily, but the PP90M1 has low enough recoil values and an unusually self-centering recoil profile to offset such a disadvantage.

Extended Mags is a very worthy attachment choice for the PP90M1, increasing the PP90M1's magazine capacity to a huge 54 rounds, and increasing the starting ammo loadout to a large 162 rounds. This will help to make reloads infrequent with the PP90M1, lessening the need for Sleight of Hand, and the extra ammo loadout lessens the need for Scavenger. Extended Mags is an attachment choice that is very safe, conferring no downside, and only helps the player.

The PP90M1 is also available as one of the loadouts in Infected where it has the Kick proficiency. The first infected will also receive a PP90M1. However, it will have Range and Extended Mags equipped.

The PP90M1 is available in Survival Mode at level 38 and costs $2000. The PP90M1 is also used by Chemical Agents. Because of its rather high damage up close, high fire rate, and decent amount of ammo, it is an effective weapon in close quarters combat. Sleight of Hand is a necessity for its long reload time.

First person view of the PP90M1

The PP90M1 in third person 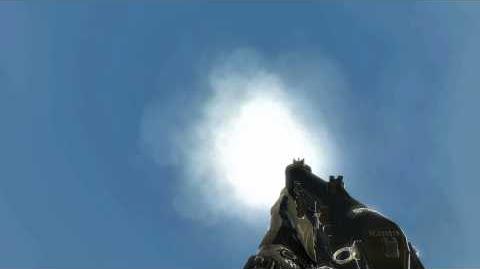 The PP-90M1 returns in Call of Duty: Black Ops: Declassified. It performs very similarly to its Call of Duty: Modern Warfare 3 counterpart; both have the same magazine capacity, low recoil, and good hip-fire accuracy. One difference being that the muzzle flash has been increased dramatically. In single player, it is used by Russian forces in various missions.

The PP-90M1 in first person with an ACOG Scope