The Pack-a-Punch Machine is a utility powered by Element 115 found in every Zombies map including and after Der Riese (excluding Dead Ops Arcade). This utility is much like the Mystery Box or the Perk-a-Cola machines. The Pack-a-Punch Machine allows weapons to be upgraded. The machine also changes the names of weapons, putting attachments on the weapon, as well as putting elaborate engravings on them. It costs 5000 points to use (1000 if Bonfire Sale is active).

When Pack-a-Punched, most weapons have increased damage, larger magazines, added effects, and more reserve ammo. Some others may gain attachments, and some may even fire different projectiles after Pack-a-Punching. Heavier weapons, such as LMGs and launchers usually gain increased mobility resulting in higher speed. Off-wall weapons can replenish ammo by buying ammo for it in the place where you bought it for 4500 points.

The Pack-a-Punch Machine (located in the starting room) is inaccessible at the start of the game and is blocked by a door. The door can be unlocked by turning on the power and subsequently linking three teleporters to the mainframe back in the starting room. This is done by pressing the action/use button on the teleporter pad, and then within 30 seconds the player or a teammate must press the action/use button on the mainframe. As each teleporter is linked, the door blocking the machine goes down and the Pack-a-Punch machine is usable. The player can also use the teleporters now.

The Pack-a-Punch machine is accessed by turning on the power behind the teleporter, then using the teleporter, which must be connected to the Mainframe first. The Mainframe is located in the starting room. The room that the player(s) teleports to is above the theater, where the Pack-a-Punch machine is located. In this room is a projector near the front. When you leave, sometimes you will be teleported to a room before you are teleported back to the main theater. In each room you can teleport to is a tape, if you tap the action button on the tapes, you pick them up and next time you teleport you can press action button on the projector and it will play the tape. There are 3 tapes in all. Every time the teleporter is used, the players must wait two minutes for it to cool down before re-linking it in order to teleport again.

The Pack-a-Punch Machine is accessible by turning on the power and using all three Lunar Landers. When each lander is used, one third of the diagram of the rocket (shown in the Spawn room as well as the power room) will turn green. After all three are used, the diagram will be completely green, signifying that the rocket is ready to be launched. The player must then go back to where the power switch is located at the top of the main building and launch the rocket. Once the rocket is launched, the door blocking the room below the rocket will open, making the Pack-a-Punch Machine accessible to the player. Unlike other Black Ops maps, the Pack-a-Punch can be reached by conventional methods without any special requirements after being unlocked.

Call of The Dead

There are four statues that spin once the power is turned on. These statues are spread out along the entire map. The first is in the center of the spawn. The second is on the far side of the rope bridge from the spawn. The third is in the power room. The fourth is in the niche in the tunnel that leads to AK74u. In front of the statues are pressure pads. Depending on how many players there are, there will be the same number of raised pads, they will be random out of the four. All players in the game will need to step on one of these pads. If there are four players, all pads must be stood on at the same time. If there are three, one pressure pad will already be locked down. The remaining three pads must then be stood on at the same time. In single player, there is only one pad that must be stood on. After all the pressure pads are stood on simultaneously, the bottom of the staircase in front of the Quick Revive appears, allowing access to the top where Pack-a-Punch awaits. Two gears then start to ascend the stairs. When they reach the top, a cascade of water will send the players back to the bottom, and Pack-a-Punch is again inaccessible. If the players are attempting to get Time Travel Will Tell achievement, the Pack-a-Punch machine will be destoryed in the process.

The Pack-a-Punch machine is located in No Man's Land, A.K.A Area 51. At the beginning of the game, players spawn next to it. To reach it again, players have to use the moon base's teleporter, which will only activate when every player is on it. The moon base's teleporter is located just past the bio-dome, near the AK-74u. When the players are in No Man's Land, Zombies will spawn and attack. When the teleporter is ready to be used again, an alarm will sound and hellhounds will begin spawning. The teleporter will activate either when all of the players are on it or the alarm ends. A player can hack the Pack-a-Punch Machine, causing the gates surrounding it to close and locking the player inside. The gates are lowered after a set amount of time, creating a potential trap for whoever was inside. 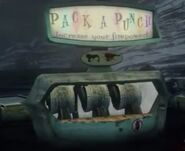 The Pack-a-Punch machine in Call of the Dead

Pack-a-Punch machine seen on Moon's loading screen, above the center of the left page.
Add a photo to this gallery

Retrieved from "https://callofduty.fandom.com/wiki/Pack-a-Punch_Machine?oldid=1557077"
Community content is available under CC-BY-SA unless otherwise noted.