For the Panamanian enemies seen at the slums, see Batallón Dignidad.

"Todo por la patria"
("All for the homeland")

The Panamanian Defense Forces (Spanish: Fuerzas de Defensa de Panamá or Fuerzas de Defensa Panameñas) were the national defense forces of Panama. Manuel Noriega, the dictator of Panama, was the Commander of the PDF. He had full control of the PDF and used them as a private police force. In Call of Duty: Black Ops II, they are featured as allies in "Time and Fate". Noriega betrays them, but they still work with the Americans. They are enemies in the Menendez playable part in "Time and Fate" and Woods' enemy faction in "Suffer With Me".

In "Time and Fate", they aid the CIA to capture Raul Menendez under the orders of Noriega. The PDF manage to capture him by assaulting his mansion, but Noriega betrayed the PDF by killing two of his own soldiers and releasing Menendez. Raul Menendez kills dozens of PDF soldiers in his search for his sister, Josefina. After Frank Woods throws a grenade at Menendez near the end of the mission and the room is destroyed, the PDF are seen helping Hudson, Mason and Woods, as well as eliminating the rest of Menendez's Cartel.

Three years after Nicaragua, President George H.W. Bush orders an invasion of Panama in order to look for Noriega and capture him alive. While the United States Army Rangers start the raid in Panama to distract the PDF, the Navy SEALs, along with Woods, Mason, and Mark McKnight, start the search for Noriega in outskirts of the city. In the ending of the mission, they are seen at the Panama Canal, still following Noriega's orders.

"Esta es su única advertencia. Atención, todos los miembros del Cartel aún con vida deben entregarse al personal militar inmediatamente. Esta zona esta bajo bloqueo."
— "This is your only warning. Attention, all the members of the Cartel that are still alive must surrender to Panamanian military personnel now. This area is locked down." Said on megaphone to the Menendez Cartel in "Time and Fate".

"Tienen cinco minutos para deponer sus armas. El edificio esta lleno de explosivos. Tenemos la intención de destruir todo el edificio, y matar a todos ustedes al menos que obedezcan las ordenes."
— "You have five minutes to get rid of your weapons. The building is rigged with explosives. We have the intentions to blow it up, and kill all of you unless you obey." Said on megaphone to US forces in "Suffer With Me".

"Deponer sus armas. Salen unos con las manos en la cabeza y no conseguiran heridos. El edificio esta rodeado."
— "Lay down their weapons. Some go out with their hands on their heads and they will not get injured. The building is surrounded." Said on megaphone to US forces in "Suffer With Me".

A Panamanian soldier in Nicaragua. 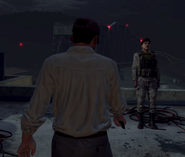 A Panamanian soldier standing in attention to General Noriega. 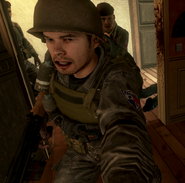 A photograph of the Panamanian military police shown in the cutscene of "Time and Fate", described as Noriega's private police.

Another picture of Panama's military police shown in "Time and Fate".