For the soundtrack, see Panthers.

The Panther tank (or Sd.Kfz. 171) was a medium tank fielded by Nazi Germany in World War II.

Unused sound files found in Call of Duty 2 indicates that the Panther was originally going to appear in that game but was scrapped at the last minute. For example, there's a sound file in which a Russian says "They got a Panther tank!". There is however, no model or texture files for the Panther.

"The Panther was designed to counter the Russian T34 tank. Its unique sloped armor and powerful, flat trajectory 7.5cm cannon made it more than a match for most Allied tanks of the war"
— Call of Duty 3 bonus materials section.

The Panther first appears in Call of Duty 3 in the level "Falaise Road", where you pass one on a Sherman, they appear again in "The Black Baron", during the tank battle on the Sherman Firefly and in "The Mace" during the German counterattack. 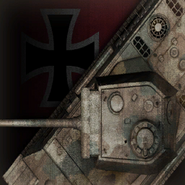 A top view for the Panther tank in the bonus menu.
Add a photo to this gallery

The Panther appear more extensively in Call of Duty: World at War in the Russian campaign - most notably in "Blood and Iron" where they make up most of the German tank force in the level. The Panther was supposed to appear in "Holland", but the level was scrapped - with the model remaining. The tank does not appear in multiplayer mode in favor of the Panzer IV.

Facing a Panther tank in "Blood and Iron".

Cut winter variant.
Add a photo to this gallery

Retrieved from "https://callofduty.fandom.com/wiki/Panther?oldid=2515260"
Community content is available under CC-BY-SA unless otherwise noted.