Hey! User! Drop the chips and get me some images!
This article is in need of quality images. Feel free to upload and/or insert some into the article.
Specific image(s) needed: In-game shots of the Panzer IV in: Call of Duty: Finest Hour, Call of Duty 3 and Call of Duty: World at War.

For the enemy from Zombies first appearing in Origins, see Panzer Soldat.
For the tank from Origins, see Mark IV Tank.

The Panzer IV (Panzerkampfwagen IV or abbreviated PzKpfw IV) is a medium tank considered to be the workhorse of the Wehrmacht, that is fielded by the Axis during World War II.

In Call of Duty the Panzer IV is the main German tank in the game. It is first seen in the level Ste. Mere-Eglise-Day, although seen throughout the campaign. It cannot be damaged by bullets or fragmentation grenades. Attempting to do so will result in a message appearing on your screen in large white letters saying "This vehicle cannot be damaged by bullets and fragmentation grenades." As such, the only way to destroy the tank is by use of the Panzerfaust 60. The tank's anti-air variant, the Flakpanzer IV Möbelwagen, also makes numerous times of appearance, first encountered in Ste. Mere-Eglise where the player's objective was to destroy them.

The Panzer IV is available for use in multiplayer. The driver controls the main gun as well as the coaxial machine gun while a second player can travel in the commander's cupola, also armed with an MG42. The passenger is vulnerable to small-arms fire and thus the second position is usually left vacant. The Panzer can withsand 3 shots (from another tank) in Multiplayer.

The Panzer IV is encountered mostly in tank battles and several when playing on foot. It takes 2 direct hit from a Panzerschreck or sticky bomb to destroy it. The Panzer IV also had a several weakness, as it can be destroyed in one hit if shot through the driver’s port, though, it would be very difficult to aim and player must do it quickly as the Panzer will shoot back. 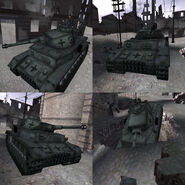 In Dead In Her Sights

Explosion after an anti-tank mine

In Come Out Fighting

A Panzer IV at the beginning of "We've Been Through Worse"

A Panzer IV during the mission "Counterattack"

"Most common German tank of WWII initially used for infantry support and tank battles. Over 9000 units produced with many variants from 1939 to 1945."
— Call of Duty 3 bonus materials section.

In Call of Duty 3's multiplayer, the Panzer IV is an available vehicle. Available on large, open maps like Poisson, it is often used as they can resist a lot of damage and for its heavy firepower. It can take up to 3 rockets from a Bazooka or Panzerschreck to destroy a Panzer IV, and a skilled or observant player using the tank can kill enemies with the main cannon or co-axial machine gun before a well-aimed shot is fired upon the Panzer IV. Another strategy players use are the sticky grenades. Players can also mantles the tank, though this can be difficult to achieve as the option only appears when a player is right behind the Panzer IV and, even then, this option isn't always available for unknown reasons. A player can use the second seat to use the mounted MG42 to aid in anti-infantry scenarios, though this player is very vulnerable. When a player is in the second seat, it is impossible to mount the Panzer IV.

There is an unfixed bug that occurs where when somebody mans the MG42 on the turret it causes the driver's main cannon to fire randomly in any direction forward of the tank as if firing from the hip and the reticle is rendered useless.

Panzer IV in the bonus materials.

In Call of Duty: World at War, the Panzer IV is seen in Vendetta, and twice during Blood and Iron, but makes its main appearance in multiplayer.

It appears in the wide open maps of Downfall, Seelow, Outskirts and Roundhouse, along with the T-34. It is often used by players, because of the Panzers high amount of armor and its heavy firepower. It can be affected by Vehicle Perks to have a higher maximum speed, faster main cannon reload, faster machine gun cool down, a co-axial machine gun or faster turret rotation. It can have a second player to use the mounted MG42. It can often take a lot of shots from Bazookas or from N° 74 STs. Usually 2 Satchel Charges and one N° 74 ST can destroy a Panzer. A single satchel charge placed under a Panzer can instantly destroy one, but only if the player is accurate. It can take 2 Satchel Charges, but the charges must be quite close to the tank in order to do so. Bouncing Betties, fragmentation grenades and even bullets and Molotov Cocktails can potentially damage a Panzer, though this damage is very insignificant. The bullets fired from a PTRS-41 do significantly more damage, but, even when using Bandolier, a Player does not carry enough Ammunition to make this a worthwhile tactic. The player will enter the tank instantly, unlike in Call of Duty 3 where the player is showing having to climb on it, open the hatch, get inside then close the hatch again before it can be used.

A Panzer IV tank in the mission "Blood and Iron" on the Wii version.

The Panzer IV tank is first seen during the mission Ettelbruck and later multiple times during the European campaign.

A Panzer IV during the mission "Ettelbruck"

A destroyed Panzer IV in the mission "The Relief of Bastogne"

Panzer IV tanks appear in the map "Berlin" as scenery. It also appears in the Season Two Cutscene driven by Carver Butcher.