Call of Duty Wiki
Register
Don't have an account?
Sign In
Advertisement
in: Call of Duty: Ghosts Launchers

The Panzerfaust (referred to as Panzerfaust 3 in the game files) is a rocket launcher that appears in Call of Duty: Ghosts. It is unlockable in Multiplayer with two rockets. It is free fire and is capable of taking down aircraft in a single rocket.

The Panzerfaust is used by the Federation in several campaign levels. However, "Birds of Prey" and "Atlas Falls" are the only missions where the launcher can actually be picked up and used by the player, since in other missions the weapon is used by enemies from unreachable areas.

Like many of its counterparts, the Panzerfaust is a powerful launcher that is accurate in medium range, but loses it in a long range. It has a huge splash damage, and is useful when enemies are in camping areas around the maps. They can destroy parts of the map that are featured to be destroyed, like the gas station and the walls on Octane. Its drawbacks are that the sights aren't as clean and takes up the player's view. The rocket, when fired, is slow, can be easy to spot in a medium/long range, and can be avoidable by going into cover. The Panzerfaust can kill any juggernaut even at full health but it has to be a Direct Hit; splash damage won't do much damage on a juggernaut.

It is advisable to equip Reflex and Sleight of Hand to equip the Panzerfaust faster and reload rockets faster, respectively. As with all explosives, Danger Close is recommended to increase the damage dealt.

The Panzerfaust makes an appearance in Extinction, in Point of Contact and Mayday. It costs $2000 to buy. In Point of Contact, it can first be found behind the motel, then in the basement of the cabin. In Mayday, it is located in the pit, in the middle of the cargo area. Compared to the Kastet, it may be a better choice because it can have an extra rocket in the maximum reserve ammo and it can be fired at a longer distance. However, the rocket will eventually lose its accuracy and therefore may make the Kastet a better choice, because although the player has to be very precise, the player can fire the Kastet into the air and have it possibly hit its target, even if the target is a long distance away.

The Panzerfaust, like the Kastet, is ridiculously difficult to use in solo play, as the only way to reliably replenish ammo for either weapon is through using Team Explosives, which automatically means that said player has no access to Armor. Neither weapon can be relied upon as a standalone weapon unless playing with teammates that can supply explosives or armour for the user. Engineers can make the most out of these weapons, since Engineers can be upgraded to deal increased explosive damage, which applies to the Panzerfaust and/or Kastet.

Due to its aforementioned weaknesses, the Panzerfaust is one of the least used weapons in Extinction, and one of the absolute worst weapons to use in solo play.

Unlike in the story versions of the maps, in Chaos Mode, the Panzerfaust works with the 'Infinite Ammo' Bonus Package, but it does create a lot of smoke, so it may obscure other players' visions.

The Panzerfaust in first-person

The Panzerfaust being drawn

Model of the Panzerfaust 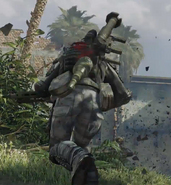 The Panzerfaust on player's back

The Panzerfaust being fired in third-person

Pickup icon of the Panzerfaust