The parachute is used in the level "Pathfinder", where Martin starts the level parachuting into a field in Normandy. Later in the level, Heath is found dead in a tree, hanging by his parachute.

It is also used in the level "Bomber", after James Doyle is pulled out of the plane after it is shot. In the next level, "Train Bridge", James Doyle starts the level stuck in a tree from the parachuting.

In the level "Ultimatum", Soap and the rest of Charlie Six begin the level parachuting. At the end of the level "Mile High Club", the player parachutes out of the plane after securing the hostage.

Parachuting out of the plane.

The parachute can be seen in a few levels in Modern Warfare 2. However, it is most humorously found in "Wolverines!", where a Russian paratrooper is found stuck in a tree, and unable to free himself.

The parachute makes a brief appearance in Black Ops, where it used in the level "WMD". After the part where Harris falls off the cliff, Weaver, Hudson, and Brooks are forced to BASE jump down the mountain due to an avalanche. The player will notice that their screen will turn like what happens if the player stayed under the water too long.

The player BASE jumping down the mountain. Note the frost around the screen.

The parachute is used in the Special Ops level "Vertigo". After eliminating many enemies on the roof, a Care Package is dropped on the roof that contains a parachute. The players will then have to jump off of the building.

The parachute is used briefly in the level "Cordis Die". David's FA38 will eventually be compromised and he will be forced to eject. After ejecting, his parachute deploys. It is also seen in "FOB Spectre", where the player will deploy a parachute after gliding into the base with the Glider Wings. They aren't seen again outside these events.

Preparing to eject from the FA38.

Arriving into the base.

The parachute is used in the level "Federation Day". At the end of the level, after the falling out of the skyscraper, Logan and the other Ghosts pull their parachutes to prevent their death. The mission ends right after that. In the level "The Hunted", Logan pulls a parachute after falling out the wrecked plane. Parachutes are also seen in the level "Severed Ties", where M1A2 Abrams are dropped with them attached for safe landing.

The Parachute being used by Logan Walker.

A parachute attached to an M1A2 Abram Tank.

Parachutes appear in Black Ops 4 as part of its Blackout mode. Parachutes can also be customized via the Black Market through Special Operations.

Luck Of The Irish skin for the Parachute.

Parachutes appear in Call of Duty: Mobile as part of its Battle Royale mode. It like in Black Ops 4 can be customized through the Battle Pass.

Parachutes are featured in the Ground War and Special Ops modes where players are able to parachute out of vehicles and high areas.

Parachutes returned to Warzone featured in all modes acting the same as in Modern Warfare. 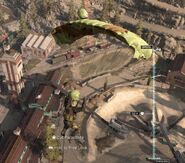 Parachutes return in Black Ops Cold War as part of its Fireteam mode as well as in the Zombies Outbreak mode.

Parachutes return in Vanguard through its campaign, seen in Operation Tonga and as part of its Arms Race mode in multiplayer.