"Once more, the Harpies come to tease and taunt us! "
— Nero Blackstone when a Parasite round starts

Parasites are enemies in Call of Duty: Black Ops III that appear on the Zombies maps Shadows of Evil, Dead Ops Arcade 2: Cyber's Avengening, Revelations, and throughout the Nightmares campaign. Parasites are flying creatures that attack the player in various numbers. They attack by shooting a liquid at the player which covers the screen, impairing vision slightly, and dealing damage.

In Shadows of Evil, Parasites are yellow-colored, shooting yellow liquid as their attack. Much like Hellhounds, Parasites appear during their own special round and the last one killed drops a Max Ammo. They also appear after a Margwa's head has been taken down. They can also appear occasionally in later rounds, in the "Capture The Flag" objective in the Easter Egg, and even spawn from a harvest pod. The parasites also show up in the Pack-a-Punch wall-run on the side of the Apothicons during the Great War.

In Revelations, they behave the same as their counterparts from Shadows of Evil, but they are red and they shoot red liquid instead of yellow.

In Dead Ops Arcade 2: Cyber's Avengening, they act as in Shadows of Evil, but only appear after one of the Margwa's heads are destroyed.

In Nightmares mode, they are purple instead of yellow. They are described by the Player as "mutated creatures born from 6-115".

In Call of Duty Online, they appear in the Super Zombie Warfare map Zombie Island and act identical to their Black Ops III counterparts. 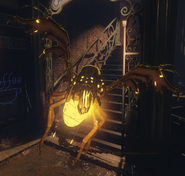 A parasite in Black Ops 3. 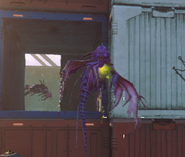 A Parasite in Nightmares
Community content is available under CC-BY-SA unless otherwise noted.
Advertisement