The Paratroopers are a 1250 scorestreak featured in Call of Duty: WWII. When called in, a squad of AI soldiers are deployed besides the player and can overwhelm enemies. These troopers aggressively react over the battlefield and will constantly attack until they are killed. Each kill obtained by the troopers is earned directly back to the player.

In the November 29th, 2017 update, the Paratroopers were nerfed to have reduced health in Hardcore modes.[1] 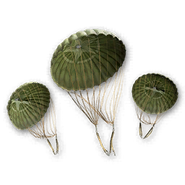 Retrieved from "https://callofduty.fandom.com/wiki/Paratroopers?oldid=2454195"
Community content is available under CC-BY-SA unless otherwise noted.