For other characters, see Parker.

Private Parker Joined the U.S. Army Parachute Infantry of the 82nd Airborne in 1942 and went through basic training at Fort Bragg, North Carolina. Then was sent to England for preparation of the Invasion of France. He jumped into Normandy on the night of the invasion and he formed up with a mixed unit and was seen in the Battle of Ste-Mere Eglise.

Private Parker is in the mixed unit that Foley had rounded up to, his original unit was the 82nd Airborne Division. During fighting at Sainte-Mère-Église, while other soldiers were fighting against Panzer tanks and Panzer-Grenadier's and other German Infantry, Parker noticed that the German Fallschirmjager's were setting up mortar positions. He alerted Cpt. Foley of this after they destroyed the Panzers, and then moved in with the rest of the soldiers to battle the German Fallschirmjager's manning the mortars. He survived the battle and, presumably, the rest of the war. Sources say he linked back up with his original unit in the 82nd Airborne. 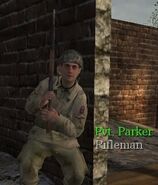 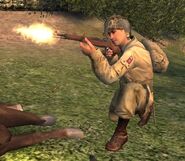 Parker firing his M1 Garand.
Add a photo to this gallery
Retrieved from "https://callofduty.fandom.com/wiki/Parker_(82nd_Airborne_Division)?oldid=2314353"
Community content is available under CC-BY-SA unless otherwise noted.