Pavlov is a multiplayer map in Call of Duty and Call of Duty: United Offensive. It is based on the mission "Pavlov".

As a map, Pavlov is well suited to many different types of play. With its tall buildings and open spaces, snipers and rifles can dominate and hold off attacks from the outside with long-ranged fire. On the other hand, the closed, cramped quarters inside each building complex lends itself to fierce sub-machine gun and support gun battles. The main goal should be to fix the enemy's riflers and snipers in place while sending sub-machine and support gunner troops down to clear the building the enemy is spawning in. The map can be roughly divided into four sectors: Pavlov's House, the Apartments, the Grist Mill, and the Offices and Outer Wall. Penzenskaia Street constitutes the open ground between each sector, which is dangerous to traverse.

Pavlov's House in the center is the tallest building in the map, consisting of a basement (where Panzerfausts, a MP44, and a FG42 can be found), four stories, and a rooftop. Because its central position allows a clear view of the entire map, this is a very important strategic point. A trench runs from the basement to the Grist Mill, a safer route to the perimeter of the map than Penzenskaia Street.

The Apartments to the North of the map are flanked by several ruins of buildings, allowing infantry to use them as cover as they move around the margins of the map. It is a fair place to snipe, as it overlooks a high traffic area. It is three stories high, with only one stairway up to each level.

The Grist Mill is a three story building made of red brick. Taking up a large portion of the first and second floors is a very wide room opened up as a result of bombing. The trench from Pavlov's House leads into a basement in the Grist Mill, where Panzerfausts, an MP44, and a FG42 can be found. It is not a particularly good place to snipe, because it does not open up to the windowed side of Pavlov's House. The nearby warehouse ruins provide cover to safely move along the perimeter of the map.

The Offices are perhaps the worst place to spawn. The building itself is a very claustrophobic two-story house, and is open to attacks coming from Pavlov's House, the Outer Wall, and the Apartments. Infantry spawning at this location often spawn outside the Offices, compounding the problem. They are not a very good place to snipe either, because they do not overlook a particularly high-traffic area.

The Outer Wall is a great place for sub-machine gunners to move along to mount an assault against the Grist Mill. It is at the very edge of the map, and the wall provides complete protection from snipers at Pavlov's House. It leads to the Warehouse Ruins next to the Grist Mill, providing further cover as they approach. From here, a sub-machine gunner can either enter the Grist Mill or move down the trench into Pavlov's House to engage in close quarters urban warfare. 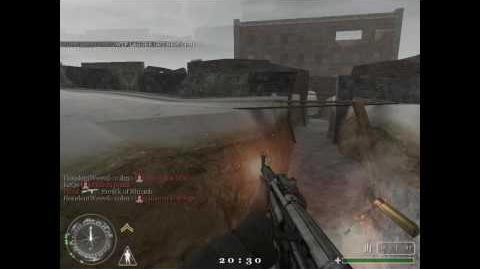