For other uses, see Payback.

"Torture at the hands of the enemy only feeds the hunger for revenge."
— Briefing

"Payback" is the twelfth campaign mission in Call of Duty: Black Ops set in Laos. In this mission, the player operates a Mi-24 Hind, in order to find Kravchenko's compound and kill him. Although the player has full control of horizontal movement, they cannot control vertical movement.

The mission begins with Mason and Woods in wooden cages, half underwater. The Vietcong then takes them to a room in a cave with VC and a Soviet Interrogator, with a table in the center, to play Russian Roulette. Mason sits down with Bowman sitting opposite. The Soviet tells Bowman that he must play or die, to which he refuses and insults the Soviet, who beats Bowman to death via blows to the head using a steel pipe, followed by him saying "next". Bowman's body is dragged away, and the player sees Woods struggling as VC force him into Bowman's seat. Woods asks Mason what the plan is, while the VC Bookie is getting impatient. The bookie spins the gun which lands on Woods, who reluctantly pulls the trigger. The gun dry-fires, and the bookie passes it to Mason. Mason and Woods agree on a plan. Woods, putting the gun down, sees the gun's barrel and the bullet in the next chamber. Thus, he informs Mason they need to execute the plan now. Mason informs Woods of the position of the enemies behind him ("6 and 8'o'clock") and then grabs and shoots the bookie point blank with the Python. He grabs the bookie's loaded pistol and, while using the bookie as a human shield, takes out the rest of the VC, but not before the Russian escapes. Mason and Woods pursue him through the cave, fighting off Viet Cong, until they find him trying to escape through a hatch. They shoot him down, and climb up the hatch outside. As the Russian falls Woods says "For Bowman!" to which Mason replies "For Bowman."

The 2nd part of the mission begins just outside the cave. Mason and Woods find a Spetsnaz platoon guarding a Russian Mi-24A Hind in a jungle clearing. They ambush them, and board the Hind. Mason acts as pilot and gunner of the Hind as they proceed up the river valley, wreaking havoc on the Ho Chi Minh Trail below, destroying SAMs, an Mi-8 HIP, sampans, NVA PT boats, armored AAAs, ZSUs and emplacements, guard towers that fire RPGs, radar tower, bridges, oil pipelines, and two Soviet Hinds before landing somewhere not far from Kravchenko's compound. Mason and Woods then reach the compound, located inside a large cave and fight their way in.

Mason finds captured American soldiers and Reznov in holding cells. After releasing them they fight their way into the cave to reach Kravchenko. When Mason kicks open the door of Kravchenko's office he is ambushed by Kravchenko, who then beats Mason. Just when he is about to knock Mason out, Woods sneaks up behind and stabs Kravchenko in the back. Kravchenko retaliates by pulling the pins on his grenade belt to kill everyone in the room. Seconds before it detonates Woods shoves Kravchenko and throws himself and the Russian through the window, followed by a big explosion below, which seemingly kills them both. Reznov returns to Mason and they find the documents leading to Rebirth Island. 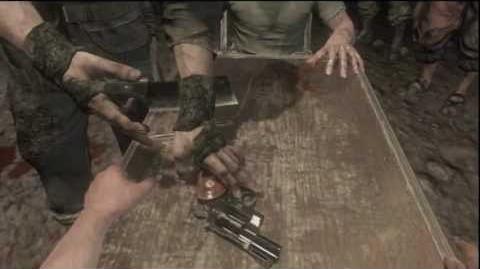 Concept art of the hind in the clearing.

Mason pointing a Python at himself.

The VC Bookie holding a butcher's knife onto Bowman's neck.

Mason and Woods about to take the Hind.

Woods standing in front of the Hind.

Climb onboard the Mi-24.

Kravchenko stabbed in the back by Woods. 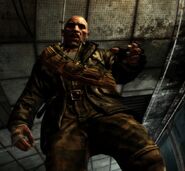 Reznov after he came out of his POW cell. 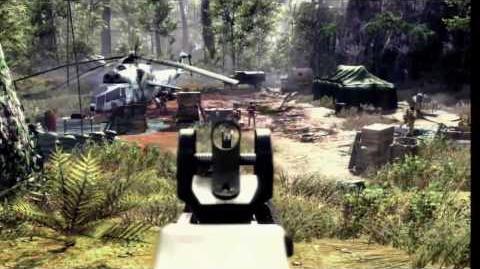 Retrieved from "https://callofduty.fandom.com/wiki/Payback_(Black_Ops)?oldid=2559665"
Community content is available under CC-BY-SA unless otherwise noted.