For the successor, see Peacekeeper MK2.

The Peacekeeper is an submachine gun featured in Call of Duty: Black Ops II.

The Peacekeeper was added in Call of Duty: Black Ops II as part of the Revolution downloadable content pack

If the player has access to the Revolution DLC, the Peacekeeper will be unlocked at level 4, and the player will not need to use an Unlock Token to equip it.

One of the Peacekeeper's weaknesses is its magazine capacity. It is tied with the MSMC for the smallest magazine capacity in tier, holding just thirty rounds. This allows the user to spawn in with 120 rounds total. Although not bad, this is poor by SMG standards.

Fast Mag and Extended Clip, although not usable together, will make reloads less of a hassle. Fast Mag will make reloads incredibly fast, while Extended Clip will give the Peacekeeper a forty round magazine in conjunction with a 160 round starting ammo loadout, at the expense of making reloads ten percent longer. Either attachment is a solid choice with next to no penalty.

The Foregrip increases the Peacekeeper's centerspeed from 1500 to 1522. The benefit is too small to consider using it.

The Adjustable Stock will increase the Peacekeeper's strafe speed to 100%, allowing the user to move faster when strafing. The Peacekeeper moves fast enough when aiming down the sights that most users won't see much need for this attachment.

An ISA agent firing a Peacekeeper

The Peacekeeper's early icon, seen in the Revolution trailer; notice how it differs from the current icon

Early concept art of the Peacekeeper 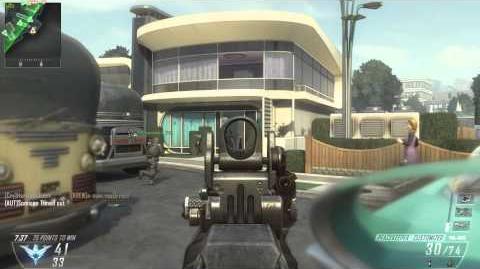