The Peacekeeper MK2 was added in Call of Duty: Black Ops III in July 28, 2016 update. It is obtainable from Supply Drops in the Black Market.

The Peacekeeper MK2 appears in Revelations, and can be acquired from the Mystery Box. It comes equipped with a BOA 3, FMJ, and High Caliber by default.

When upgraded via the Pack-a-Punch Machine, it becomes the Writ of Shamash.

Peacekeeper MK2 vs Writ of Shamash

First-person view of the Peacekeeper MK2 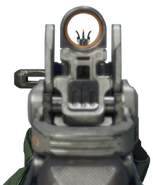 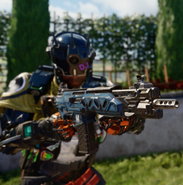 The Peacekeeper MK2 returns in Call of Duty: Black Ops 4 as the Peacekeeper. It was added with the Days of Summer continuation of the Operation Spectre Rising update.

The Peacekeeper is available in the Mystery Box for 950 points on all maps. When upgraded via the Pack-a-Punch Machine, it becomes the Writ of Shamash gaining increased damage, double the base magazine size and 512 reserve ammo.

The Peacekeeper was added to Blackout, and can be acquired from a Blackjack Stash in limited time modes after the player acquires it from Reserves. It uses 5.56mm ammunition. 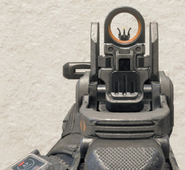 Achieve 30 Headshot kills with an Assault Rifle to unlock

The Peacekeeper MK2 returns in Call of Duty: Mobile. It was added as part of the Season 13 Wint3r War update.

The Peacekeeper MK2 can equip the Well Forged Barrel, which increases the base range by 50% without a negative. The Task Force Barrel also increases range by 50% with an increase in the base fire rate from 652 to 720 RPM, but with two severe downsides, with vertical recoil increasing by 20% and horizontal recoil by 15%. The Built-in Silencer barrel is equipped with an integrated suppressor, with a range increase of 25%. Long Range Barrel increases the range value by 100% and reduce ADS Bullet Spread by 20%, but increases ADS time by 35% and reduces movement speed by 5%. The Rapid Fire Barrel increases the fire rate from 652 to 740 RPM, increases base damage from 26 to 31, increases ADS Bullet Spread by 20%, but offers a range reduction of 40%.

Aim down sight movement speed is slightly below average at 39%, with the base movement speed at 92%. The Lightweight perk can be formidable with this weapon. The Agile Stock is a viable choice for the Peacekeeper, increasing ADS movement speed by 40% with the Sprint-to-fire delay decreased by 30%. However, the Agile Stock comes with a downside of a 24% increase to the hip fire spread.

The magazine size of the Peacekeeper MK2 is 25 rounds, smaller than most peers in the class. As such, an Extended Mag is a suitable choice to mitigate this weakness.

The recoil of the Peacekeeper MK2 is moderate to low. The recoil pattern is similar to the KN-44, however the gun kicks horizontally slightly stronger than the KN-44. The Peacekeeper MK2 has the highest accuracy in the Assault Rifle class with a bullet spread accuracy score of 7.46, surpassing the GKS. The Foregrip attachment decreases horizontal recoil by 30% with no caveats.

The Peacekeeper MK2 is available in Battle Royale. It deals normal damage and features mediocre rate of fire, but boasts high accuracy at range. It also features absurd range and has the mobility of a submachine gun. The gun is available on floor as Rare and Epic blueprints, while the Legendary blueprint, is obtainable from Airdrops or certain high tier loot zones.